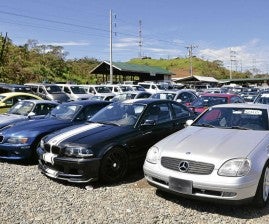 A fleet of imported used luxury vehicles—including Porsches, BMWs, Mercedes-Benzes, Hummers—await wash and polishing work at a car lot in Casambalangan village in Santa Ana, Cagayan, in this file photo. The Cagayan Special Economic Zone and Freeport in Sta. Ana has little or no comparison with the more developed Subic Bay Freeport in Zambales. MELVIN GASCON/INQUIRER NORTHERN LUZON

STA. ANA, Cagayan—A shipment of 446 used luxury cars, sport utility vehicles, sedans and vans arrived at Port Irene here on Saturday, even as a controversy continues to rage over the legality of such importations in the face of a Supreme Court ban and despite a moratorium that the government has issued against their registration.

The MV Zambales, a Panamanian-registered cargo vessel, docked at the pier here at 8:30 a.m. amid rain and wind that delayed its arrival by 18 hours.

Officials of the Cagayan Economic Zone Authority (Ceza), which oversees the port’s operations, have dismissed allegations the arrival of the car shipment was in defiance of a Supreme Court ruling that reinstated a government ban against the entry of used vehicles into the country.

At 10 a.m., the shipment was cleared for unloading by a boarding team representing the customs, quarantine and immigration bureaus. At 1 p.m., the ship’s ramp was lowered and stevedores began unloading the vehicles that originated from Yokohama, Japan, and Kaohsiung, Taiwan.

Leilani Alameda, deputy collector of the Bureau of Customs here who was on the team that inspected the cargo, said the processing of the shipment would be deferred because of standing orders from Customs Commissioner Ruffy Biazon.

“This (inspection) is part of our mandated function to inspect cargo arriving in the country. But we are under strict instructions not to entertain any applications to have these processed, until further notice,” she said.

Based on a shipping manifest obtained by the Inquirer, the shipment contained about 30 Hummers, 53 Mercedes Benz sports cars, 21 BMWs of various models, seven Porsches consisting of 911, Boxster and Carrera models, a Ferrari F335 Berlinetta and a Lamborghini Murcielago.