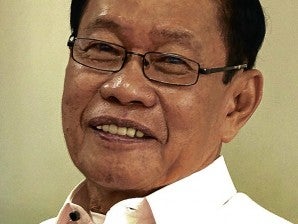 A practicing lawyer for the past 55 years, Alcantara is an advocate of social justice, particularly equitable distribution of economic and political benefits and opportunities in society. He is the founding president of SJS, a registered political party that he and colleagues set up in 2001 to pursue the ends of social justice.

Like other minor political parties and independent candidates running for the Upper House, Alcantara has made the abolition of political dynasties the centerpiece of his platform.

In 2002, SJS pressed the House of Representatives for the adoption of a bill against political dynasties. When the bill was ignored, the group sued House leaders at the Supreme Court, which, however, ruled that it could not compel a coequal branch of government to do its job to legislate.

Alcantara scoffed at politicians who say that not all dynasties are corrupt and that everybody has the right to run for public office, whether he or she belongs to a dynasty or not.

“It’s not like there’s good cholesterol and there’s bad cholesterol. The Constitution clearly states that all political dynasties, whether good or bad, are prohibited, period,” he said.

A native of Bangued, Abra, Alcantara recounted how, as a young student, he was already aspiring to enter the legal profession. Back then, one of the most nationally prominent Abra residents was lawyer-turned-senator Quintin Paredes.

“I grew up in an ordinary rural family. My parents managed a rice land and a small property. My father was a friend of Don Quintin and because I was a bright student, people would always tell me I should be like Don Quintin one day. That’s why when I was young, I didn’t think of anything but to become a lawyer. And now I’m aspiring to be senator like him,” he recounted.

After graduating valedictorian at Abra High School in 1951, Alcantara went to Manila and took up law at the MLQU School of Law. He placed third and soon found a job at the Paredes, Poblador, Nazareno and Azada law firm in downtown Manila.

Paredes was then an incumbent senator and could not practice law but he would sometimes drop by the firm to chat with employees.

“He would give us advice about how to be good lawyers. The best piece of advice he gave me, which I keep until now, is: ‘In case of doubt, observe the rule of silence.’ One shouldn’t be a talkative lawyer, especially if you, or your witness, aren’t sure of what you’re talking about,” Alcantara said.

On Feb. 23, Alcantara was invited to the unveiling of a historical marker at the ancestral house of Paredes in downtown Bangued. Alcantara also motorcaded in the capital as part of his campaign. Sunday, Feb. 24, on his way to Manila, Alcantara will stop by several towns in the Ilocos and Central Luzon regions to campaign.

He disputes portrayals of Abra as a “wild, wild west.”

“It’s only dangerous by reputation, but it’s not really dangerous there, although I think some people may want to live to that reputation. One political murder that takes place in the capital becomes magnified because the news is sensationalized. It doesn’t mean the entire province is a dangerous place. Abra people are peace-loving citizens,” he said.

But Alcantara also believes that the government should do more about controlling the proliferation of loose firearms not only in Abra but in all parts of the country.

“We cannot have total gun ban if we have loose firearms. If the government can’t be sure that there are no more loose firearms, then legal possession should still be allowed,” he said.

He said higher penalties should be enforced against criminals who use unregistered firearms to commit crimes and suggested that legitimate gun-owners should be subjected to periodic neuropsychiatric exams.

Alcantara, through SJS, has questioned the legality of such issues as religious leaders endorsing candidates during the campaign season, mandatory drug testing for crime suspects and public officials and simultaneous oil price hikes.

Alcantara said he would rely on his friends and supporters who helped SJS’s causes and Abakada Guro’s party-list campaign. He said he would time his lecture tour in Visayas and Mindanao early this year so that he can also campaign. He has also tapped social media for support in his candidacy and maintains a Facebook page and a Twitter account.

Even at the age of 77, he said he is still strong enough to campaign and, if elected, to do legislative work.

Alcantara’s wife Evelyn died of leukemia in 2011. He currently lives in Quezon City with his two sons—a musician and a creative director for an advertising agency.

If elected to the Senate, Alcantara said he would push for the adoption of more social justice laws and the fine-tuning of existing ones. He also has a platform for senior citizens.

“We should not wait for seniors to reach 100 years old and award them with cash gifts. As soon as people, especially the poor, become senior citizens, the government should start giving them free healthcare, caregiving services to make their life more comfortable,” he said.

Alcantara’s other platforms include quality education, increase of employment opportunities, development of social values, protection of public officers against discriminatory practices, fair and speedy administration of justice, development of natural resources, elimination of oppressive impositions and environment-related hazards and assistance to entrepreneurs.

“Social justice has largely remained a slogan, it should be put into action. Congress made social justice laws such as agrarian reform, the Labor Code, human rights, but more fine-tuning is needed. The government must take steps to protect those who have less in life. Make the weak a bit strong but don’t make the strong stronger,” he said.