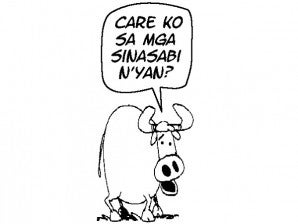 A septuagenarian woman in Olongapo city stood quietly on stage late Thursday night looking for a familiar face among the VIPs there, a local candidate she said she had known for years.

Just a few steps away was a senatorial candidate of the United Nationalist Alliance (UNA) talking about the value of delicadeza (propriety) in politics and things like climate change and good government, his words blaring across the Rizal Triangle covered court here.

But these were of no concern to this 75-year-old woman, a cigarette vendor trying to earn a living for her jobless children. Her concerns centered on having enough money for food and a little more to spare for medicines. Never mind if candidates played both sides or switched to the other with veteran ease.

That night at the UNA rally, she was hoping to get the attention of a local official.

“Are you a senator?” she asked this reporter. “Have you seen him? I saw him there earlier,” she said, pointing to the other side of the stage where the candidates were waiting for their turn at the microphone.

Save for the typical celebrity intermissions and giveaways, gut issues are what capture an audience in campaign rallies, UNA candidates who barnstormed through Pampanga, Zambales and Bataan this week agreed.

“I don’t want to dull the people by promising this or that. It’s easy to say those things. But you need to explain them and I find that voters become more loyal to you if you explain your platform to them,” Gordon said.

That the campaign is about “messaging,” a central strategy of UNA, is apparent in each candidate’s effort to connect with a variety of audiences. The success, of course, will not be known until the last ballot is counted three months from now.

Candidates like Juan Miguel Zubiri, a former congressman, seems to be struggling with explaining terms like “eco-warrior” to a crowd of mostly vendors and housewives. They were generally quiet when he brought up the election protest of Sen. Aquilino Pimentel III that prompted him to resign from the Senate in 2011.

Before launching on his stump speech, Zubiri did a few dance steps, a more lively version of former Sen. Ernesto Maceda’s version of “Gangnam Style.” Only after he saw that he had captured the crowd’s undivided attention did he begin talking about public health and the environment.

Again, of no moment to a cigarette vendor. The public’s health is not top of mind.  She herself is diabetic and hypertensive.

Margarita “Tingting” Cojuangco, a former governor of Tarlac, is facing some challenges of her own.

Save for her popular surname, she is not as well known as the other UNA candidates, as indicated by her poor showing in the polls. But she is not exactly left behind when it comes to campaign gimmickry.

Cojuangco typically draws loud cheers by giving away walis ting-ting (broomstick), an apparent play on her nickname, at the start of her spiel. For better recall, she says that her husband is the brother of the late President Cory Aquino. She has five daughters, too, including former equestrienne and actress-model Mikee Cojuangco-Jaworski.

Rep. Mitos Magsaysay believes that issues like the expulsion of three common candidates from UNA are not necessarily of interest to voters.

“What they want to hear more are the platforms and advocacies of each candidate and what they can offer as a solution to the problems of the people,” she said.

Magsaysay was on her turf during the Olongapo rally. Wearing four-inch elevator shoes, she was introduced with the pitch, “Ang mahusay na buhay, ibibigay ni Mitos Magsaysay” (Mitos Magsaysay will give you the good life).

She went on to talk about how she wanted to duplicate national programs in her Zambales district, such as subsidy for college students and free medical checkup and maintenance drugs for senior citizens.

The 75-year-old woman waiting at the side of the stage came exactly for that, a cash handout for her meds.

Later she was joined by other Olongapo folks in a similar fix. One of them personally handed to Magsaysay a medical prescription. She said her child was confined in a local hospital after premature birth.

Magsaysay told the woman to coordinate with her staff, as she could not personally attend to it. The candidate was to deliver her campaign speech in a few minutes. The woman’s face sank but she stayed on.

Toward the end of the rally at around 10 p.m., a woman from Magsaysay’s staff approached the woman. Others flocked around the staffer and soon she was surrounded by a crowd. They all came for the same reason, the “gut issues” the politicians on stage are hard pressed to deal with. They can only promise, and promise some more.