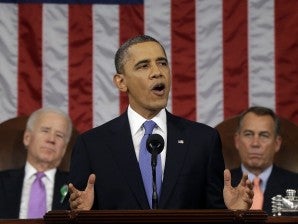 WASHINGTON – The Barack Obama administration on Friday formally asked the US Supreme Court to strike down a 1996 law defining marriage exclusively as a union between a man and a woman.

The request was contained in a legal brief filed to the US high court, whose nine justices plan next month to review whether or not to repeal the federal Defense of Marriage Act (DOMA), which bans marriage between homosexuals.

According to the filing, the law “violates the fundamental constitutional guarantee of equal protection” before the law stipulated by the US Constitution.

DOMA “denies to tens of thousands of same-sex couples who are legally married under state law an array of important federal benefits that are available to legally married opposite-sex couples,” read the brief signed by US Solicitor General Donald Verrilli.

The administration’s decision to challenge the Defense of Marriage Act is not surprising, since Obama has signaled on various occasions recently that he is that he is in favor of gay marriage.

During his second inaugural address last month, the president likened the struggle for gay rights and the Civil Rights movement of past decades.

“Our journey is not complete until our gay brothers and sisters are treated like anyone else under the law, for if we are truly created equal, then surely the love we commit to one another must be equal as well,” Obama said.

He also drew a parallel between several watershed struggles in US history — that of women at the landmark Seneca Falls convention in 1848, the 1960s civil rights battles and the Stonewall riots of June 1969, which are widely seen as having sparked the gay rights movement.

Another nod to the homosexual community during Obama’s second inauguration was the selection of gay poet Richard Blanco to read a poem composed for the occasion.

In 2011, Obama abolished the Pentagon’s “Don’t Ask, Don’t Tell” policy requiring military recruits to hide their homosexuality, or risk being expelled from the service.

Last year, he became the first sitting US president to speak in favor of gay marriage.

As a result of DOMA, gay marriage is banned at the federal level. However, after gay rights advocates won several local referendums, it is now legal in nine out of 50 US states and in Washington DC.