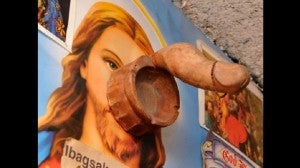 MANILA, Philippines—A Jesus Christ poster featuring a wooden penis glued to his face that has sparked protests in the mainly Catholic Philippines was attacked and damaged by vandals on Thursday, an official said.

An unidentified couple smashed a penis-motif wooden ashtray glued onto the poster and tried but failed to set fire to the entire collage, said Karen Flores, visual arts department chief of the Cultural Center of the Philippines.

One of the vandals then gave a lecture on morality to the lone guard assigned to the exhibit and other visitors before the couple casually walked out of the government building, Flores told Agence France-Presse.

“The exhibit will continue,” Flores said, adding the attack may have been linked to an outcry over the exhibit that church leaders and Catholic groups want ended on the grounds it is blasphemous, immoral, offensive and illegal.

The artist has been told of the vandalism and he agreed to continue to exhibit his work, she added.

The controversial collage, by local artist Mideo Cruz, is part of an exhibit showcasing works by alumni from a church-run university aiming to challenge people’s perceptions of figures they idolize.

It also includes a cross made of discarded wood with a woodcarving of a penis attached, and an icon of Jesus that has a red clown nose and Mickey Mouse ears.

Exhibits by two other artists, which have neither provoked the same public response, were also damaged in the attack, Flores said.

The CCP has earlier rejected call for the exhibit’s closure, saying it was covered by freedom of expression guaranteed by the Philippine Constitution.