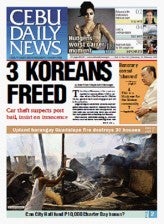 The three Koreans who were arrested in connection with a series of car theft cases in Metro Cebu posted bail and stepped out of jail yesterday.

Their counsel, Bienvinido Baring Jr., in an interview, said his clients have nothing to do with the car theft incidents that specifically target Hyundai Starex vans.

“I will prove the innocence of my clients. As a lawyer, it is my duty to defend them. I’m convinced of their innocence,” Baring told reporters.

He said the three are engaged in selling used Korean-made cars.

“Maybe, they were just in the wrong place at the wrong time. My clients are not part of the syndicate,” Baring said.

The three Koreans were arrested by police in Mandaue City last Wednesday. A complaint for carnapping were filed against them before the Cebu City Prosecutors’ Office.

During inquest proceedings, the three accused through their counsel chose not to avail of a preliminary investigation which could have given them a chance to submit their counter-affidavits to refute the allegations.

They were also charged with illegal possession of drugs and drug paraphernalia together with their alleged Filipino cohort, Raphael “Rap-rap” Montilla.

“Fortunately. Rap-rap has agreed to become a witness against the two kay least ra man iyang participation,” he said.

Montilla was arrested in his house in Talisay City for allegedly trying to sell two stolen vans.

In their joint affidavit of arrest, the police said they were tasked to validate information regarding an alleged stolen Starex van in barangay Cabancalan, Mandaue City.

At about 5:45 am last Wednesday, they spotted three persons getting off a parked gray Starex van which has no plate number.

“We suspected that it was stolen considering that it has no plate number and was left unattended beside the road,” said Senior Insp. Philip Silva, PO1 Monet Montenegro, PO2 Alexis Tangub, and PO3 Cedric Castillo, all of the Mandaue City Police Office.

They later on learned that the vehicle was owned by Perater whose Starex van was stolen in barangay Parian, Cebu City last Feb. 4. When they searched the vehicle, the police recovered several license plate numbers.

The police said they got an information that one of those who disembarked from the vehicle is the owner of Suwon Jonghop Korean Car dealer located along A.S. Fortuna Street in Mandaue City and has rented a warehouse in barangay Cabancalan, Mandaue City.

The police went to the car display center where they arrested Kim.

They also proceeded to the warehouse and arrested Won and Jang.

The police discovered dismantled parts of vehicles inside the warehouse.

Perater, a resident of barangay Parian in Cebu City, identified the gray Hyundai Starex van as his missing vehicle.

In his affidavit, he said he parked his Starex van infront of his residence in Parian last Feb. 3. The following day, he was surprised when the vehicle was gone.

RSOG’s Ylanan said they are building up the case to pin down the alleged masterminds of the syndicate identified as Cho Hyun Cher alias “Mr. Chu” and one “Mr. Lim.”

Cho visited the Police Regional Office 7 himself last Wednesday to clear his name. Cho, whom Kim and Hong tagged as their mastermind during tactical interrogation, was not arrested because mere identification reportedly is not enough to arrest him. Lim remains at large

As of yesterday, 11 of the 12 reported stolen vans were recovered by police.