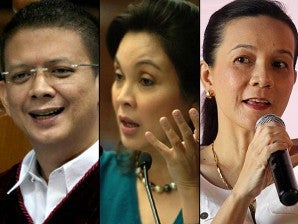 ILOILO CITY, Philippines——The erstwhile common candidates of Team PNoy and the United Nationalist Alliance on Thursday heaved a sigh of relief after UNA decided to junk them from its senatorial lineup for not showing up in the latter’s campaign sorties.

Reelectionist Senators Loren Legarda and Francis Escudero and Grace Poe, however, expressed sadness over UNA’s decision to drop them as common bets, but said they would respect the coalition’s move.

Legarda, senatorial candidate of the Nationalist People’s Coalition (NPC), said she was grateful to UNA for the support it had given her and stressed that she would remain focused on serving the Filipino people.

“I’m grateful for the opportunity extended to me by UNA. I regret their decision to drop the common candidates from their slate, but I respect it and maintain my high regard for its leadership,” Legarda said.

“More than us politicians, this campaign is about the Filipino people and their needs. I continue to have the highest respect for President Estrada, Vice President Binay and Senate President Enrile,” she added.

Legarda said her political party, the NPC, has coalesced with the Liberal Party and that makes her an official candidate of the LP-NPC coalition.

At the Iloilo provincial capitol where Team PNoy candidates held a news conference, Escudero said he was also sad about UNA’s decision to junk them but added that he respected the coalition’s move.

Asked if it was a relief that the issue of common candidates had been put to rest, Escudero said, “Yes, because this election has never been about petty issues of which rally you attend.”

“While I consider UNA’s decision removing me from their senatorial slate a big loss, I maintain that the elections in May are more about issues and platforms rather than parties and coalitions,” Escudero said.

But Escudero said he harbored no ill will toward UNA and its leaders after its decision to junk him. “I still believe that outside of politics, we’d still be friends,” he added.

Escudero said that while he will remain an independent candidate, he would now be joining most of the campaign hops of Team PNoy after UNA’s decision.

Sought for comment on UNA’s move, Poe replied: “Parang nabunutan ako ng tinik [It’s like a thorn has been pulled from my side].”

“When I learned that there were conditions [for being adopted by UNA], of course, I found myself in a difficult situation,” she added.

“My Ninong Erap told me, ‘Grace I can’t withhold support for you because of your father [actor and former presidential candidate Fernando Poe Jr.]. It’s sad but I guess his hands are tied. It hurts, it’s sad but I understand,” she added.

Legarda, Escudero and Poe were among the members of the Team PNoy senatorial slate that went through Iloilo province on Thursday with President Aquino and campaign manager Sen. Franklin Drilon, who hails from the province.