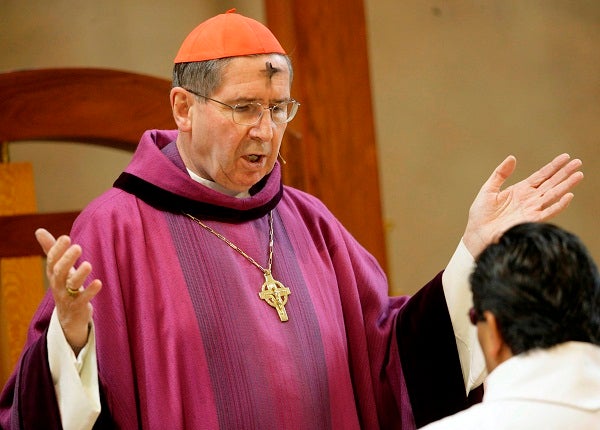 In this Feb. 6, 2008 file photo , Cardinal Roger Mahony officiates during Ash Wednesday services at the Cathedral of Our Lady of the Angels in Los Angeles. Popular pressure is mounting in the U.S. and Italy to keep California Cardinal Roger Mahony away from the conclave to elect the next pope because of his role shielding sexually abusive priests, a movement targeting one of the most prominent of a handful of compromised cardinals scheduled to vote next month. AP/Nick Ut

VATICAN CITY — Popular pressure is mounting in the U.S. and Italy to keep California Cardinal Roger Mahony away from the conclave to elect the next pope because of his role shielding sexually abusive priests, a movement targeting one of the most prominent of a handful of compromised cardinals scheduled to vote next month.

Amid the outcry, Mahony has made clear he is coming, and no one can force him to recuse himself. A Vatican historian also said Wednesday that there is no precedent for a cardinal staying home because of personal scandal. But the growing grass-roots campaign is an indication that ordinary Catholics are increasingly demanding a greater say in who is fit to elect their pope, and casts an ugly shadow over the upcoming papal election.

Conclaves always bring out the worst in cardinals’ dirty laundry, with past sins and transgressions aired anew in the slow news days preceding the vote. This time is no different — except that the revelations of Mahony’s sins are so fresh and come on the tails of a recent round of sex abuse scandals in the U.S. and Europe.

This week, the influential Italian Catholic affairs magazine Famiglia Cristiana asked its readers if the Los Angeles-based Cardinal Mahony should participate in the conclave given the revelations. “Your opinion: Mahony in the conclave: Yes or No?” reads the online survey of one of Italy’s most-read magazines.

The overwhelming majority among more than 350 replies has been a clear-cut “No.”

The magazine is distributed free in Italian parishes each Sunday. The fact that it initiated the poll is an indication that the Catholic establishment in Italy has itself questioned whether tarnished cardinals should be allowed to vote — a remarkable turn of events for a conservative Catholic country that has long kept quiet about priestly abuse and still is deferential to the church hierarchy in its backyard.

That initiative followed a petition by a group in the United States, Catholics United, demanding that Mahony recuse himself. So far 5,600 people have signed the petition, according to spokesman Chris Pumpelly.

“It’s the right thing to do,” Andrea León-Grossman, a Los Angeles member of Catholics United, said in a statement on the group’s website. “In the interests of the children who were raped in his diocese, he needs to keep out of the public eye. He has already been stripped of his ministry. If he’s truly sorry for what has happened, he would show some humility and opt to stay home.”

Mahony, however, has made clear he will vote. “Count-down to the papal conclave has begun. Your prayers needed that we elect the best pope for today and tomorrow’s church,” he tweeted earlier this week. He promised daily Twitter updates.

Cardinal Velasio De Paolis, one of the Vatican’s top canon lawyers, told The Associated Press that barring any canonical impediments, Mahony has a right and duty to vote in the conclave. At best, he said, someone could persuade him not to come, but De Paolis insisted he wasn’t suggesting that someone should.

Bishop Charles Scicluna, the Vatican’s former sex crimes prosecutor, said it was up to Mahony’s conscience to decide whether or not to participate.

“It’s not an easy situation for him,” Scicluna was quoted as saying by Rome daily La Repubblica.

Last month, a court in Los Angeles ordered the release of thousands of pages of confidential personnel files of more than 120 priests accused of sex abuse. The files show that Mahony and other top archdiocese officials maneuvered behind the scenes to shield accused priests and protect the church from a growing scandal while keeping parishioners in the dark.

Mahony was stripped of his public and administrative duties last month by his successor at the largest Catholic diocese in the United States. But the dressing-down by Archbishop Jose Gomez only affected Mahony’s work in the archdiocese, not his role as a cardinal. Gomez has since urged prayers for Mahony as he enters the conclave.

Mahony has responded directly and indirectly to the outcry on his blog, writing about the many “humiliations” Jesus endured.

“Given all of the storms that have surrounded me and the archdiocese of Los Angeles recently, God’s grace finally helped me to understand: I am not being called to serve Jesus in humility. Rather, I am being called to something deeper — to be humiliated, disgraced, and rebuffed by many,” Mahony wrote.

He said in recent days he had been confronted by many angry people. “I could understand the depth of their anger and outrage — at me, at the Church, at about injustices that swirl around us,” he wrote. “Thanks to God’s special grace, I simply stood there, asking God to bless and forgive them.”

Mahony is scheduled to be questioned under oath on Saturday as part of a clergy abuse lawsuit about how he handled a visiting Mexican priest who police believe molested 26 children in the Los Angeles archdiocese during a nine-month stay in 1987. The Rev. Nicolas Aguilar Rivera fled to Mexico in 1988 after parents complained. He has since been defrocked but remains a fugitive, with warrants for his arrest in both the U.S. and Mexico.

Historian Ambrogio Piazzoni, the vice prefect of the Vatican library, said there was no precedent for a cardinal staying away from a conclave because of personal scandal, though in the past some have been impeded either by illness or interference by governments.

Regardless, he said, any decision to stay away would have to be approved by the full College of Cardinals given that the main duty of a cardinal is to vote in a conclave.

“The thing that characterizes a cardinal is to be an elector of the pope,” he told reporters.

Italian newspapers have been filled with profiles of the cardinals whose presence at the conclave would be an “embarrassment” to the Vatican. They include Irish Cardinal Sean Brady, accused of covering up sex abuse; Belgian Cardinal Godfried Danneels, whose offices were searched in 2010 amid a crackdown on pedophile priests by Belgian police; and Cardinal Justin Rigali who retired as archbishop of Philadelphia in disgrace after a grand jury accused him of keeping credibly accused abusers on the job.

Dirty laundry was also aired in the run-up to the 2005 conclave that elected Cardinal Joseph Ratzinger as pope.

Argentine Cardinal Jorge Bergoglio, for example, was cited in a criminal complaint just days before the conclave alleging involvement in the 1976 kidnappings of two fellow Jesuits during Argentina’s dark years of

military dictatorship. The cardinal’s spokesman at the time called the allegation by a human rights lawyer “old slander.”

According to the only published account of the 2005 secret balloting, Bergoglio came in second place.