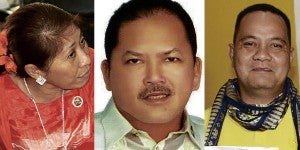 Seen from one of the rocky outcrops leading to the Bat-ongan Cave in Masbate’s Mandaon town, the island province is ready for harvest with rice fields heavy with golden grains. Sixty kilometers to the east is the capital of Masbate City, where pasture grasses sway with the waning monsoon wind along the road, tossing thoughts of lasting peace.

Contrary to what the scenes suggest, Masbate and its long history of political violence may be far from reaping serenity.

The three murders are unrelated, according to Senior Supt. Heriberto Olitoquit, provincial director of the Philippine National Police (PNP), but they could all be connected with the upcoming elections.

In 2010, an election year, Masbate surprised political observers when it registered a relatively low number of election-related killings. Yes, lives were still lost, but the decline was deemed a success, credited to the Masbate Advocates for Peace (MAP), a Church-led multisectoral group, and the Special Task Force Masbate (STF Masbate), comprising PNP and Army members.

With the latest killings of Aragona, Amaro and Baguio, the 2010 relief might not be believable, or could just be a stroke of luck in the blood-tainted electoral history of the province.

There are reasons to consider it a one-time bright spot.

Senior Supt. Arnold Albis, commander of STF Masbate, expects the gubernatorial race to be “a duel” between two of the province’s powerful political clans—the Khos and the Lanetes. Rep. Antonio Kho of the second congressional district is seeking to reclaim his old seat occupied by incumbent Gov. Rizalina Seachon-Lanete, who is seeking reelection.

Albis, in an interview with the Inquirer, said the presence of partisan armed groups and the “affinity to guns” of many people could also be counterproductive to government efforts to ensure honest and orderly elections.

Mayor Ben Espiloy of Monreal town on Ticao Island said he had been surrounding himself with civilians to deter attempts to kill him. So does Mayor Gracia Llamado of Baleno town, which borders Masbate City.

What may also compromise the 2013 elections is the dwindling number of MAP members and, consequently, the ranks of those calling for a peaceful political exercise.

The MAP lost one of its vocal leaders, Fr. Leo Casas, who has joined the gubernatorial race, and, in turn, its very strong ties with the Church. Lest it be accused of politicking, the group has decided to distance itself from the priest.

On the other hand, cases of political violence may be easing. In January, only seven killings were reported, down from 15 in last year’s same period. According to Olitoquit, all of the cases are not deemed politically motivated pending further investigation.

STF Masbate, he said, was blunting the capability of at least four of the six known armed groups being maintained by local politicians, hampering their mobility through patrols and checkpoints.

The Villaruel group based in Balud was being kept at bay by policemen and soldiers deployed all over the province, he added.

New armed groups are, however, emerging. With “loose” or unlicensed guns still proliferating, they pose a threat to the conduct of elections and nullify the gains of 2010.

According to a highly placed official, guns from Cebu were entering Masbate despite a stepped-up campaign against gun trafficking.

All of the 20 municipalities are considered hot spots, the official said, but Aroroy could be the most risky area because the race to control the gold-rich town is expected to be fought at all costs.

Olitoquit said the situation could worsen if armed groups would breach the checkpoints set up by STF Masbate.

Law enforcers could do only so much to make the elections peaceful, he acknowledged. “In the end, lasting peace would come to the province only after its people stopped embracing violence,” he said.

Lanete, in an interview in 2011, admitted that political violence persisted in Masbate “although it had toned down.” The killings had put Masbate in a bad light and must be stopped, she said.

If the younger generations of politicians would stick to their words, the road map to peace is clear, she added.

Her son, Rep. Scott Davies Lanete of the third district, who took over her post when she successfully ran for governor in 2010, said the best way to end the violence was “to replace culture of fear with culture of respect.”

“The people should have freedom to speak and politicians should respect that,” he said.

Cataingan Mayor Wilton Kho, a son of Antonio, said the longtime peace and order problem could be solved through reconciliation of feuding families.

“Political clans in Masbate are not really warring or feuding. We just have differences in policy. We are very much open to reconciliation—and unity,” Wilton said.

Small but visible signs indicate that the proverbial wind of change is on its way, albeit slowly, to Masbate. And these could turn the tide and sustain the peace in 2010.

In Masbate City, resorts and restaurants have been sprouting like crazy along Jesse M. Robredo Boulevard, which faces the Masbate Bay and Masbate Pass.

And residents are again going out at night for leisure. Children play from morning to night at the park in front of the Capitol—something they had not done in a not-so-distant time.

The upcoming elections could prove or disprove the notion that the southernmost province of Bicol, notorious for its guns, goons and gold, especially during elections, is finally treading the path to peace.