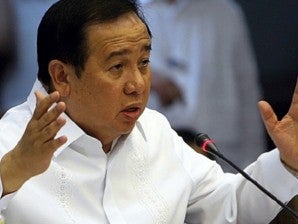 MANILA, Philippines—He may not be among the Top 12 senatorial bets in the latest ranking of a mainstream survey firm but for Atenean voters, returning candidate and former senator Richard “Dick” Gordon is their No. 1 pick.

The survey, conducted by the Ateneo Statistics Circle from Feb. 6 to 15 among 200 Ateneans of voting age, showed that 71 percent of the respondents would pick Gordon for senator.

According to the elite school’s official paper The Guidon, former congresswoman Risa Hontiveros ranks second, garnering 69 percent of the votes.

In third and fourth place are Paolo Benigno “Bam” Aquino, a nephew of President Aquino, and incumbent Sen. Francis Escudero, with 65 percent and 63 percent of the votes, respectively.

Gordon, Hontiveros and Aquino obtained their bachelor’s degrees from Ateneo while Escudero graduated from the University of the Philippines.

Gordon is a candidate of the United Nationalist Alliance while Hontiveros and Aquino are with the Liberal Party-led coalition of the administration. Escudero is a common candidate of both parties.

Gordon, a former mayor of Olongapo City, became chairman of the Subic Bay Metropolitan Authority during the administration of President Fidel Ramos, and secretary of tourism under the administration of President Gloria Macapagal-Arroyo.  In 2004, he was elected as senator under the ticket of Ms. Arroyo. He later ran for president in the 2010 elections, but lost. He is currently chairman of the Philippine National Red Cross.

Hontiveros is a former Akbayan representative, while Escudero is a reelectionist senator. Bam Aquino used to be with the National Youth Commission and had co-founded a social enterprise company.

The Ateneo survey also showed that only one-fourth of the respondents had picked a complete lineup of 12 senators. 50 percent voted for at least eight senators, while 3 percent did not list anyone at all.

The survey respondents were also asked to rate the desirable qualities they value in government officials, using a scale of 1 to 5 with 1 being the “most desirable.”

For the respondents, honesty, commitment, and knowledge of the work were the most desirable traits. As to the issues they think the government must pay attention to, they picked education, corruption, and poverty as the most important.