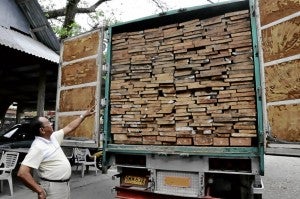 Isidro Mercado, Laguna Environment and Natural Resources Officer,  said in a phone interview Tuesday he was surprised when he saw from pictures of the operation that the wood products were about to be transported through  Caliraya Lake.

Mercado, who also chairs the task force composed of the Laguna police, Philippine Army, Department of Interior and Local Government, and the provincial government, said the wood products were recovered near the man-made water body, almost on the boundary of Kalayaan and Mauban in Quezon, after an aerial search on February 12.

It  took the authorities some time to bring the timber to Sta. Cruz town where the provincial government offices are located.

The round and squared timber of red and white Lauan, tangili and malaruhat from the dipterocarp family, which could fetch P266,000 if sold, were presented at a press briefing at the Laguna police headquarters on Tuesday.

Laguna police director Senior Superintendent Pascual Muñoz, also interviewed by phone, said some of the logs were still in the water when found.

He said illegal loggers usually haul the wood products down the mountains on carabao-drawn carts and from there, transport the wood on boats to avoid detection by the authorities on land.

The authorities have already “sealed” the exit points around the Caliraya Lake after discovering the route, Mercado said.

The task force will also start planting fuel wood and coffee on 320 hectares of land in the area to discourage residents from  “easy money” in the illegal logging business.

Mercado said the operation last week was the third since April last year, in accordance with the total log ban imposed by President Benigno Aquino in 2011.