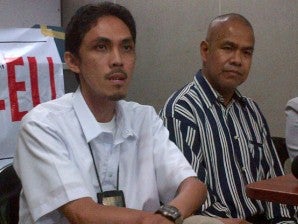 Comelec Employees Union President Mark Ramirez (left) formally announces their endorsement of lawyer Alexander Pilotin (right) for the position of Comelec commissioner. Pilotin said that he will push for the increase in salary of Comelec workers and their benefits. INQUIRER.net/MATIKAS SANTOS

MANILA, Philippines – Members of the Commission on Elections (Comelec) Employees Union (EU) announced Tuesday their candidate for the position of Comelec commissioner and called on President Benigno Aquino III to appoint someone “from the ranks.”

Comelec-EU National President Mark Ramirez introduced lawyer Alexander Pilotin, 46, the current Regional Election Attorney of Comelec Region II and also Election Officer of Santiago City, Isabela, to reporters saying that he “will work for the best interest of the rank and file.”

Pilotin said that he will push for the welfare of the 5,000 employees of Comelec nationwide, adding that they are just as important as the holding of the elections.

In a letter to Aquino, Ramirez said that Comelec workers “have long been burdened by the low salary we receive compared to workers in other government agencies and constitutional bodies.”

“An Election Officer 1 is paid with a measly monthly salary of P18,333 (salary grade 12) despite the huge responsibility of running the elections in a district, city, or municipality,” Ramirez said.

In comparison, an Election Officer’s counterpart in the local government, such as a Municipal Treasurer, gets a monthly salary of P49,750 (salary grade 24), he said.

“For employees in the Comelec Central Office … most of them are left with a take home pay of P3,000 monthly because of mandatory deductions and left and right loans,” Ramirez said.

“We believe Pilotin has sufficient experience in the field as an election officer and sufficient knowledge of election laws,” he said.

Two commissioner posts are currently vacant after the retirement of Commissioners Rene Sarmiento and Armando Velasco.

This is the first time the 2,500-strong Comelec-EU has formally endorsed a candidate for the post of Comelec Commissioner.