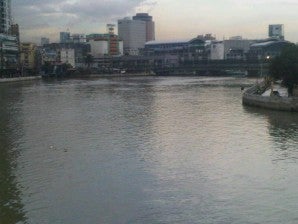 View of the Pasig River from Binondo Bridge in Manila  INQUIRER.net/RICK ALBERTO

MANILA, Philippines—Boys shout in delight as they flip backwards off a bridge. Fishermen quietly cast rods out. They are joyful acts that should belong to an earlier era, before the Pasig River turned toxic.

Yet some slum dwellers in Metro Manila whose shanty homes choke the river and its tributaries have little choice but to live as if the national capital’s most important waterway is clean.

“It’s hot. We have no other place to swim and escape the heat,” 16-year-old Christian Ivanes said as he took a break from jumping off a bridge near the mouth of the river with his friends.

Ivanes, his seven siblings and a few hundred other illegal squatters live under the bridge in stilt houses made of junk wood and plastic, their existence as desperate as any in an Asian megacity infamous for its brutal poverty.

Shopping from the community stall at high tide requires wading ankle-deep through plastic wrappers and other garbage that is floating in black water. A thick stench rises with strong hints of untreated sewage and industrial waste.

“There have been people who have gone into this with an open wound and died,” said Gina Lopez, a prominent environment campaigner who is leading the latest government drive to clean up the Pasig.

The national government is spending P10 billion ($240 million) a year to transform the waterway and its 47 tributaries, according to Lopez, chairperson of the Pasig River Rehabilitation Commission.

Half the money is being spent on trying to relocate about 300,000 squatters who live directly along the banks of the river and tributaries, known locally as esteros.

“As long as there are illegal dwellers living along the estero, using the place as their toilets and dumping garbage, there’s no clean-up that can happen. So that’s the beginning,” Lopez said.

The commission has cleared and rehabilitated four esteros since 2010, when President Benigno Aquino took power and implemented the program, according to Lopez.

It is aiming to start work on 16 more this year, then have all the esteros as well as the Pasig transformed by the time Aquino ends his term in 2016.

At Estero de Paco, a 2.9-kilometer tributary that a few years ago was one of the most polluted in the city, shanty homes have been replaced with tree-lined boardwalks while water-treatment machines now nestle amid plants.

The more than 1,300 families, or roughly 6,500 squatters, who lived within three 10 feet of the channel have been relocated, while vendors at a nearby market have stopped dumping garbage into the water.

Programs with local water companies to improve sewage facilities have also been implemented.

Flooding that regularly hits the area has lessened because drains are not blocked by garbage, according to Lopez, and the residents who have remained beyond the three-meter clearance zone appear much happier.

“It’s like living in a subdivision now,” said Evelyn Quitala, 51, who has called Estero de Paco home all her life and runs a small shop from her two-storey concrete home.

“We can now jog here along the footpath and our children don’t have to go somewhere else to play… and it is no longer smelly.”

Estero de Paco is being used as a template for cleaning up the entire Pasig river system.

Nevertheless, while the estero may look better, the water remains badly polluted, according to Javier Coloma Brotons, an urban development specialist at the Asian Development Bank who is involved in cleaning up the tributary.

And although the rehabilitation commission is aiming for a major transformation of the entire water system within just three years, Coloma Brotons cautioned the project could take decades to complete.

He said many of the city’s more than 12 million residents polluted the waters in some way.

Among the myriad of problems he cited were the lack of sewage treatment plants and trained people to maintain them, countless small businesses that dump waste into the water, and polluting industries upstream.

Coloma Brotons also pointed out that the 27-kilometre Pasig River — which connects Laguna de Bay, the largest lake in the Philippines, with Manila Bay — is tidal.

This means pollution from the vast Manila Bay, including waste from huge ports, washes back up the river.

“To clean up the river, you also have to address problems with the bay,” Coloma Brotons said.

Adding to the complexity is the general chaos of the Philippine political system, which makes it extremely difficult for a co-ordinated approach from many government branches and vested interests.

Such issues have led to repeated and costly failures to transform the Pasig.

The national government launched its first project to rehabilitate the Pasig in 1989, and the rehabilitation commission was formed 10 years later with a mandate to completely transform the waterway by 2014.

Even now, few people expect the government to be able to relocate 300,000 slum dwellers by 2016, as similar programs for other shanty towns across Manila have repeatedly failed over recent years.

People are determined to stay in the slums despite the atrocious conditions because they are close to jobs, with relocation sites typically many hours’ commute from Manila.

“I believe Manila can be interlinked and interlaced with waterways that are clean and avenues for recreation,” she said.