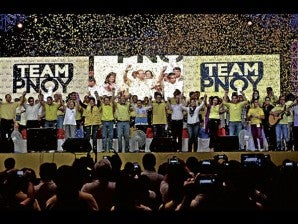 MANILA, Philippines—Spokesmen of the administration’s senatorial coalition on Monday challenged the opposition United Nationalist Alliance (UNA) to bare its platform and programs instead of engaging in personality-oriented attacks.

Quimbo complained in an e-mailed statement to the Inquirer that Tiangco had accused him of issuing fraudulent loans when he was the head of the government’s Pag-Ibig Fund during the Arroyo administration.

Before that, Tiangco also tagged Sen. Sergio Osmeña III as the real power behind the Liberal Party (LP) coalition’s senatorial campaign, and not Sen. Franklin Drilon who is the official LP general campaign manager.

Team PNoy is an LP-led coalition of senatorial candidates from various political parties that include the Nationalist People’s Coalition (NPC) and the Nacionalista Party (NP).

“The questionable and fraudulent loans that Cong Toby is referring to what happened after I left Pag-Ibig. If he simply checks the dates of these fraudulent loans, it will reveal that they happened after March 15, 2009, the day I was replaced as chief executive officer. It did not happen during my watch,” Quimbo said.

“It might also interest him to know that I was unceremoniously replaced as CEO of Pag-Ibig Fund precisely because of my refusal to expand the pilot lending window to Globe Asiatique as was being demanded by the developer from Pag-Ibig,” Quimbo said.

“I am proud of the work I did in Pag-Ibig where I was hired as a professional to manage the workers’ provident fund. From a small workers’ fund, by the time I left, it had become a P250-billion asset company and was the most profitable government corporation generating P10 billion in net income and was the biggest taxpayer of the government in 2008,” he said.

“We were financing 60 percent of all housing loans in the country and providing multipurpose loans to at least 2 million members annually,” the congressman also said.

Instead of personal attacks, Quimbo asked Tiangco and the rest of UNA to “stick to platforms and programs. Lay down your alternative programs in eradicating poverty and joblessness.”

In the case of Tiangco’s accusations against Osmeña, Quimbo said it should not be taken against the senator if he chooses to help or advise certain senatorial candidates.

Quimbo said Tiangco, whom he called “a very close friend,” should instead check out the advocacies being espoused by some of Team PNoy’s senatorial bets to get an idea of how an issue-oriented campaign is conducted.

“Aurora Rep. Sonny Angara has an educational reform agenda and access to health services [while] Sen. Loren Legarda has an environment advocacy… Sen. Alan Peter Cayetano is an advocate of public accountability and transparency while former Rep. Risa Hontiveros is a champion of the law on reproductive health and a defender of the rights of the marginalized,” the Team PNoy spokesman said.

“From day one, we have adhered to a high-level, performance-based campaign focusing on the advocacies of the team’s individual members that are in tune with the President’s anti-poverty and anti-corruption programs,” Quimbo added.—With reports from Doris Bongcac and Carla Gomez, Inquirer Visayas