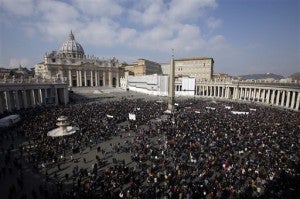 VATICAN CITY — Pope Benedict XVI blessed the faithful from his window overlooking St. Peter’s Square for the first time since announcing his resignation, cheered by an emotional crowd of tens of thousands of well-wishers from around the world.

Smiling broadly, Benedict raised his arms outstretched to the massive crowd in his second-to-last Angelus blessing before leaving the papacy. A huge banner in the square read: “We love you.”

The pope’s voice was strong and clear as he looked into hazy sunshine over the square packed with at least 50,000 pilgrims.

Benedict made no reference to his stunning decision to step down on Feb. 28. But in an indirect nod, he thanked the faithful for their “affection and spiritual closeness.” The crowd broke out into cheers and wild applause.

The pope gave particular thanks to the “beloved inhabitants of the city of Rome,” a possible hint at the title he will take after retirement. The Vatican has suggested he may be called “emeritus bishop of Rome.”

The traditional noon appointment normally attracts a few thousand pilgrims and tourists, but city officials prepared for a crush of people.

“We wanted to wish him well,” said Amy Champion, a tourist from Wales. “It takes a lot of guts to take the job and even more guts … to quit.”

From Sunday evening, the pope will be out of the public eye for an entire week: A meditation service at the Vatican marks the beginning of the traditional Lenten period of reflection and prayer.

Rome threw on extra buses and subway trains to help deal with the crowds, and offered free shuttle vans for the elderly and disabled.

While cardinals elect his successor next month in a secrecy-steeped conclave in the Sistine Chapel, the 85-year-old Benedict, the first pontiff to resign in 600 years, will be in retreat at the Holy See’s summer estate in the hills southeast of Rome.

After several weeks, he is expected to move into a monastery being refurbished for him behind Vatican City’s walls and lead a largely cloistered life.

The Vatican hasn’t announced the date of the start of the conclave, but said on Saturday that it might start sooner than March 15, the earliest date it can be launched under current rules. Benedict would have to sign off on any earlier date, an act that would be one of the last of his nearly eight-year papacy.

Meanwhile, the first cardinals started arriving in Rome to begin a period of intense politicking among the “princes of the church” to decide who are the leading candidates to be the next pope. Guinea-born Archbishop Robert Sarah, a cardinal who leads the Vatican’s charity office, told reporters when he arrived Sunday at Rome’s airport that the churchmen should select their new leader with “serenity and trust.”