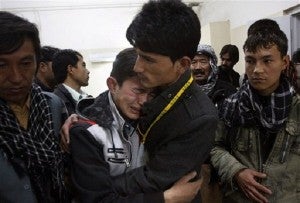 A Pakistani man comforts another mourning for a family member who died in a bomb blast, at local hospital in Quetta, Pakistan on Saturday, Feb. 16, 2013. Senior police officer Wazir Khan Nasir said the bomb went off in a Shiite Muslim-dominated residential suburb of the city of Quetta. Residents rushed the victims to three different hospitals. AP/Arshad Butt

QUETTA, Pakistan — A bomb hidden in a water tank ripped through a crowded vegetable market in a mostly Shiite neighborhood in a southwestern Pakistani city Saturday, killing at least 81 people, officials said.

Police official Fayyaz Saumbal said Sunday that many of the people who were critically wounded died overnight of their wounds. He says 164 people also were wounded by the explosion that ripped through a crowded vegetable market Saturday in the city of Quetta.

It was the deadliest incident since bombings targeting Shiites in the same city killed 86 people earlier this year, leading to days of protests that eventually toppled the local government.

Shiites have been increasingly attacked by militant groups who view them as heretics and non-Muslims in this Sunni Muslim dominated country. Many of the Shiites in Quetta, including those in the neighborhood attacked Saturday, are Hazaras, an ethnic group that migrated to Pakistan from Afghanistan more than a century ago.

Quetta police chief Zubair Mahmood told reporters that the bomb was hidden in a water tank and towed into the market by a tractor. He said the blast destroyed shops in the neighborhood and caused a two-story building to collapse.

“We fear some victims may be found buried there,” he said.

Mahmood said police did not yet know who was behind the bombing but a local television station reported that Lashker-e-Jhangvi, a Sunni extremist group that has targeted Shiites in the past, had called to claim responsibility.

Senior police officer Wazir Khan Nasir said the bomb, set off in a residential suburb, was detonated by remote control.

Another officer, Samiullah Khan, said the bomb was detonated while dozens of women and children were buying produce for their evening meal. Local residents rushed the victims to three different area hospitals, often in private vehicles because there weren’t enough ambulances to transport the victims.

A massive plume of white smoke rose over the area after the bomb blast. Television footage of the scene showed the streets littered with rubble from destroyed buildings, mixed with fruits and vegetables and shattered street carts.

Near one of the hospitals where the dead and wounded were taken, a man stood weeping as people were being taken in on stretchers.

“Look at our misery! We are helpless,” he said.

Members of the minority Shiite sect took to the city’s streets in angry protest, blocking roads with burning tires and throwing stones at passing vehicles.

Many also started firing into the air in an attempt to keep people away from the area in case there was a secondary explosion. Sometimes insurgents stagger the explosions as a way to target people who rush to the scene to help and thus increase the death toll.

Police cordoned off the area. Most of the Shiites in the area are Hazaras, and they were quick to blame Lashker-e-Jhangvi.

“This evil force is operating with the patronage of certain elements in the province,” said Qayum Changezi, the chairman of a local Hazara organization.

Saturday’s attack was the worst since a series of bombings on Jan. 10 killed 86 people in Quetta, almost all Hazara Shiites. Residents were so furious that they refused to bury their dead for days, instead camping out on the streets with the bodies in coffins in protest and demanding the government address the problem.

After days of protests, Prime Minister Raja Pervaiz Ashraf flew to the city to meet with protesters and sacked the chief minister and his cabinet. But Saturday’s attack showed the still potent power of the militant groups behind such incidents.

Quetta is the capital of Baluchistan province, where the Shiite minority has been attacked several times in recent months. Baluch nationalist groups are fighting an insurgency there to try to gain a greater share of income from the province’s gas and mineral resources. Islamic militants are also active in the province.

Pakistan’s intelligence agencies helped nurture Sunni militant groups like Lashkar-e-Jhangvi in the 1980s and 1990s to counter a perceived threat from neighboring Iran, which is mostly Shiite. Pakistan banned Lashkar-e-Jhangvi in 2001, but the group continues to operate fairly freely.

Last year was particularly deadly for Shiites in Pakistan. According to Human Rights Watch, more than 400 were killed in targeted attacks across the country. The human rights group said over 125 were killed in Baluchistan province, most of whom belonged to the Hazara community.

Rights groups have accused the government of not doing enough to protect Shiites in the country.