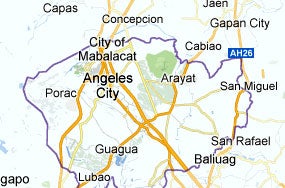 FLORIDABLANCA, Pampanga—Eight boys have been accused of destroying 50 tombs and stealing items from the dead in the cemetery here. The tomb raiding and vandalism have never been encountered here or elsewhere and have outraged the community.

The boys, aged 13 to 16, have agreed to place themselves under the custody of social workers. Details of their support program would be discussed in a closed-door meeting among the boys, their parents, aggrieved families, village leaders and school principals, Mayor Eduardo Guerrero said on Thursday.

The municipal social welfare department has taken custody of the children. The Juvenile Justice and Welfare Act of 2006 (Republic Act No. 9344) exempts children 15 years old or younger from criminal liability, according to Cherish Bernalte, the social welfare officer assigned to the case.

Village watchmen have secured them to protect them from retaliation by the aggrieved families.

No complaint has been filed against the boys. They were first detained and turned over by their parents to authorities on the night of Feb. 4 after a village watchman caught one of them ransacking a coffin that was interred earlier that day, a police report said.

The boys allegedly took the P130 that the dead’s family tucked in the coffin.

That night, an angry mob filled the police station. Some people in the group screamed expletives at the boys. Other people tried to hurt them, prompting the police to temporarily hold the boys in a cell to protect them, said Supt. Rodney Baloyo, chief of police here.

Two older boys were identified by the younger suspects as the group’s leaders, and were arrested on Feb. 5.

One of the boys said his older companions ordered them to crack open the niches with hammer. These older boys were the ones who took and wore the belongings of the dead, he said.

“They claimed they did it for the thrill or out of pressure,” Bernalte said, but the boys ended up exposing themselves to health hazards.

She said the boys had not admitted to destroying 50 tombs. Seven families have come forward to complain about the vandalism, she said.

The aggrieved families have demanded new coffins and payment for damages. One of them said the coffin of her husband, Rogelio, interred on Jan. 26, was found on the cemetery grounds on Feb. 4, its glass cover smashed and the handles stolen.

The boys regularly skipped classes and spent idle time at the cemetery nearby, the Inquirer learned.

“I don’t know what evil entered these boys’ minds,” Guerrero said. “But their families should be mainly responsible for them.”