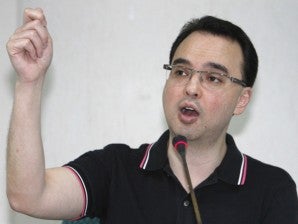 MANILA, Philippines – Despite the much-heralded 6.6-percent economic growth registered in 2012, to get by ordinary folk  have to continue relying on “five-six” loan sharks who give out loans at 20 percent interest, reelectionist Senator Alan Peter Cayetano said Saturday.

Cayetano, who is running with the administration coalition Team PNoy, said he conducted consultations with market vendors and tricycle drivers in Metro Manila in the first week of the campaign period. It is these sectors that are the regular clients of loan sharks.

Cayetano, one of the three Nacionalista Party members in the coalition that is led by the Liberal Party headed by President Aquino, said the government should create more cooperatives and expand existing ones that could lend money to their members at low interest rates.

“It’s not enough that we have 6.6, we need to erase 5-6,” said Cayetano, contrasting the economic growth rate to the usurious rate poor borrowers have to contend with in the underground economy.

Five-six operators charge a steep 20-percent interest for loans while banks charge six to eight percent and rural banks 15 percent, according to the senator.

“It is unfortunate that our people are forced into these circumstances because they either cannot afford today’s high prices or lack jobs or are forced into accepting lower wages,” said Cayetano.

He told the Philippine Daily Inquirer in a phone interview his market visit to Tondo showed that vendors had yet to feel the 6.6-percent economic growth the country posted under the Aquino administration in 2012.

“They said their sales continued to be slow (matumal). They also said that while they had a cooperative, they still borrowed money from five-six [loan sharks],” Cayetano said.

They are also concerned about the high incidence of crime, he added.

Cayetano kicked off his campaign with breakfast and consultations with market vendors at the Pritil Market in Tondo, Manila, on Tuesday and with flower vendors at the Dangwa Market on Wednesday.

In a dialogue with tricycle drivers in Taguig City on Friday, Cayetano said he learned that they took home to their families only P200 daily from a gross income of P600. Cayetano said P200 went for gasoline and P200 went to the tricycle operator.

“Two hundred pesos [is] not even half the daily minimum wage,” he noted.

“If tricycle drivers only make this much, it is not surprising that they resort to borrowing from five-six operators just to make ends meet,” he said.

Cayetano told members of the Taguig Tricycle Operators and Drivers Sassociation he would introduce measures “that will translate to better livelihood opportunities for them complementary to those already put in place by the Taguig City government.”