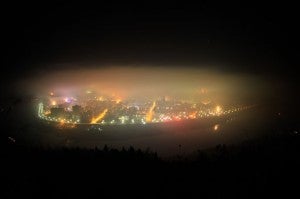 In this photo taken on 00:13 a.m. on Sunday, Feb. 10, 2013, smog covers the downtown area of Zhushan County, central China’s Hubei Province, after residents around the area set off fireworks to celebrate the arrival of Chinese Lunar New Year. Setting off fireworks is a tradition in China during the Spring Festival, which result in air pollution in varying degrees, Xinhua said. AP

Chinese traditionally set off fireworks to welcome in the new year and ward off evil spirits.

Xinhua News Agency says more than 6,500 fires broke out across the country from Feb. 9 to Feb. 15 and caused property losses of 58 million yuan ($9 million).

It cited a statement from the fire department of the Ministry of Public Security. It didn’t say what caused the fires.

There were fewer fireworks than normal in the capital, Beijing, this year, following government appeals to reduce them following particularly bad air pollution.