Serving ‘lechon, pancit’ could be vote-buying 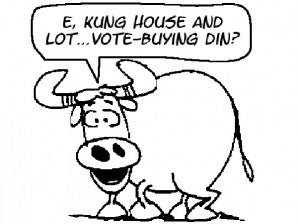 The way to a man’s—or woman’s—heart may be through the stomach but candidates should be forewarned that serving the voting public food and drink on the eve of Election Day may well be construed as vote-buying.

Commission on Elections (Comelec) Chair Sixto Brillantes Jr. on Friday said giving away food such as the pork dish lechon or the feast day staple pancit to voters on the eve of the elections is something that could fall under vote-buying.

The Comelec said it was mulling over coming out with a measure that will reduce, if not totally eradicate, the practice of vote-buying among candidates during the May elections.

But Brillantes said the election body will keep it under wraps and will roll it out not more than 10 days before Election Day to avoid preempting their plan.

“This will serve as a warning on vote-buying,” Brillantes told reporters in an interview yesterday.

“My colleagues in the Comelec and I are planning something… we are studying constitutional issues on the matter. But if it pushes through, we won’t have a problem anymore with vote-buying,” he said.

Brillantes said it was possible that the en banc would issue a resolution on the matter, which would take effect a week or so before May 13, the country’s second automated elections.

“If I reveal what it is now, our plan will be futile. Because vote-buying is really being used a few days before the elections, usually two days or on the eve of the balloting,” he said.

The Comelec chief also reminded candidates that while “electoral propaganda gadgets” such as lighters, fans, pens, mugs, candies and umbrellas can be distributed during their campaign, giving away “something of value” can be considered vote-buying.

He defined vote-buying as giving away money or anything valuable for the purpose of getting a vote.

Giving away lighters, cigarettes, umbrellas and shirts are already allowed for campaign purposes after Republic Act No. 9006 or the Fair Elections Act repealed a provision in the Omnibus Election Code declaring as unlawful the “purchase, manufacture, request, distribution or acceptance” of electoral propaganda gadgets, Brillantes noted.

“These materials are no longer prohibited in the course of the campaign as long as they are freely given as campaign materials and they will reflect as part of the candidates’ expenses,” said Brillantes.

“But if you use that close to the elections, we can classify it as vote-buying,” he said.

He said it has been difficult for the Comelec to go after candidates engaging in vote-buying. “That’s why up to now, no one has been jailed for it… but I will send someone soon, as long as there is evidence,” he said.

Brillantes said all are bound by the rules of fair play when it comes to campaign regulations.

The Comelec chief made this statement as he took offense over insinuations of a party-list group that the election body was turning a blind eye on violations of campaign rules and regulations supposedly by candidates close to President Aquino.

Calling the Kabataan party-list’s remarks “uncalled for,” he urged the group to shut up and start complying with the poll body’s “common poster area” rule by removing its illegal posters scattered across Metro Manila.

“With all due respect to Mr. Terry Ridon of the Kabataan party-list, Comelec will never be selective in implementing our campaign rules,” said Brillantes on his Twitter account.

The Comelec chief said in an interview on Friday that it was better for the group to just follow the law and stop jumping to conclusions.

He also encouraged the group to provide the election body evidence on their allegations so that it could act on it. “If they will just be all noise, we can’t do anything about their complaint,” said Brillantes.

During a surprise inspection on Wednesday, the Comelec spotted posters of the group illegally plastered along plant boxes on Taft Avenue in Manila and inside Polytechnic University of the Philippines.

In a statement, Kabataan party-list said it has already called on its volunteers and supporters to adhere to the Comelec rules. Efforts to remove illegally placed posters have also started, according to Ridon.

“We ask Comelec not to go after small fish while turning a blind eye [over] violations made by those with big names and those close to the President. Their effort to regulate campaigning will be useless if it exempts allies of the President and big families from the rules,” he added.

Comelec spokesperson James Jimenez also reiterated yesterday that under Comelec Resolution No. 9615, candidates are allowed to put up their posters in designated common poster areas “but at their own expense.”

“They will have to spend for the structure where they can mount their posters,” said Jimenez.

According to the resolution, parties and candidates may put up common poster areas in every barangay. “One common poster area is allowed in a barangay with 5,000 registered voters or less. An additional designated area will be allowed for every increment of 5,000 voters,” said Jimenez.

He also warned that the Comelec will go after erring election officers who fail to inform candidates and voters of the location of designated common poster areas in their respective areas.

“While the list of common poster areas are placed outside local Comelec offices, election officers should make an effort to ensure that [these] are known to the candidates and the public… failure to do so shall make him liable for gross neglect of duty,” added Jimenez.