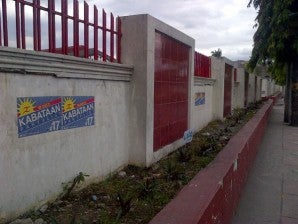 Illegal campaign posters. Thanks to the “anti-epal” campaign, the number of illegally posted campaign materials has noticeably gone down this year, according to the Commission on Elections. PHOTO BY MATIKAS SANTOS/INQUIRER.net

MANILA, Philippines—Thanks to the “anti-epal” campaign, the number of illegally posted campaign materials has noticeably gone down this year, according to a Commission on Elections (Comelec) official.

Comelec spokesman James Jimenez said Thursday the number of illegal posters was significantly lower this year compared to the number in the 2010 presidential elections.

“If you go around Metro Manila, even the side streets, there are fewer (illegal posters) now. At this point during the campaign (in 2010), the whole underpass of Quiapo (in Manila) was already plastered with posters,” Jimenez said. “Now, you don’t see any. There are a few but, on the whole, no ‘wall papering’ is happening. Everywhere you go, you see a big difference from 2010.”

Jimenez attributed this to the backlash on “epal” politicians, a popular coinage that refers to those who put their names prominently in announcements of public projects or in posters.

“We really had a strong backlash against the ‘epal.’ Ever since the ‘epal’ campaign gained traction, we were telling (politicians), ‘You know your happy days are now over,’” he said.