Loren on love: I’m not a cougar… 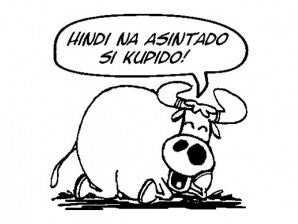 Do Sen. Loren Legarda’s initials also stand for “loveless?” The better question is, does she even care?

“Let him search for me! Excuse me, why should I search [for him],” the senator said in mock irritation over dinner with Inquirer editors and reporters on Tuesday night when asked about the possibility of her finding a significant other.

And forget about seeing her with a younger man, in vogue nowadays.

“I’m not a cougar… I don’t think I can be a cougar,” she said, using the term for an older woman primarily attracted to younger men.

Legarda is used to public interest in her private life—particularly her love life, which at the moment is pretty much nonexistent. This was why she was not surprised when she was bombarded with questions on whether there was a man in her life, especially this Valentine’s season.

After Legarda’s marriage to former Batangas Gov. Antonio Leviste was annulled in 2008, the senator has been linked to various men, not all of them eligible.

One persistent rumor links her to a “mentor,” Sen. Edgardo Angara, who is in the last months of his second consecutive term in the Senate.

Sent via Inquirer’s Twitter account that night was a question whether she has a “romantic relationship” with the elderly senator.

“My, God! That is what (broadcaster) Karen Davila asked me this morning! That is an old, recycled, false and baseless question, which I have answered many times before,” said Legarda, who had just arrived from the proclamation rally of Team PNoy, the coalition of three political parties that fielded 12 senatorial candidates for the May 13 elections.

The rumor about the elderly senator surfaces every time Legarda is running for an elective position.

“You know why? There’s no issue they can throw at me and it’s not even something na napipikon ako (that I’d be touchy about), it’s so amusing,” she said.

Legarda, however, dodged the question when asked whether she is “close” to him.

Of course, there are other names being linked to her. One is a television anchor who lost in the 2010 senatorial election (“That’s really strange.”). There are also rumors that she is seeing a basketball player.

“I don’t even watch basketball. See, people are really desperate to link me to someone,” she said.

Legarda said that to appease the public, she would search for a man once the May election is over and would present him in a press conference.

“Just to satisfy everyone’s curiosity… Alangan namang kayo lang ang may karapatang lumigaya (You’re not the only ones who deserve to be happy),” she jested.

Apparently, she said, people do not seem to believe there is no man in her life.

Obviously, the senator is too focused on seeking reelection to find a man—or let a man find her right now. On the day of hearts, Legarda was off to Legazpi City in Albay province to grace an invitation to an unromantic tree-planting event sponsored by the town mayor and his wife.

“I said ‘yes’ a long time ago, even before the [preoccupation with the] campaign. Anyway, I don’t think I can go to all the (Team PNoy) rallies and (Liberal Party campaign manager) Franklin Drilon knows this,” she said.

Besides, a lover is probably the last and least of Legarda’s concerns right now. Being No. 1 in candidate preference surveys on senatorial candidates, she believes her love affair is with the Filipino people.

Legarda said the giddiness she feels when she sees the crowds that squeal when she arrives would be akin to infatuation.

“It’s something I can’t explain but the excitement [people] show me when they touch me and see me and the excitement I feel when I see the people whom I feel appreciate my presence, it’s still there during every campaign,” the senator said.

“So, our love affair with the Filipino people and the love I get from my family, I think is more than enough to compensate for romantic love for the meantime,” she added.