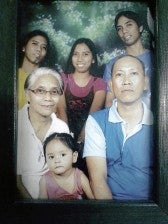 Beatriz Go has never heard her husband say “I love you.” She has heard no love song, no sweet nothings, from the man she has been living with for the last 35 years.

Instead, Alexander, being deaf, has loved her in ways that go beyond words.

She’s 66 while he’s 53. A former nun, she used to be his sign language instructor at the Philippine School for the Deaf in Pasay City. The wide age gap being no barrier, his special needs led him to her and her special calling found a vessel in him.

Today they form the pillars of a family of 10—including three children of their own and five more who are adopted. Three of the adopted children are also deaf.

“It just happened.  He was 22 when he started making an effort for me,” said Go, whose face may be familiar to televiewers as the sign language interpreter on TV Masses and previously on the public service program “Kapwa Ko, Mahal Ko.”

“He would come over just to cook for me or bring me lunch. He lived on España, Manila, but would always be my escort taking me home to Pembo, Makati City. He was that consistent,” she said.

One summer, Alexander went on a solo trip to Marinduque province to see her family and ask for her hand in marriage.

There he met some stiff opposition: Some of her relatives disapproved, citing potential “communication problems” between the two. They also saw him becoming a mere dependent because of his disability. Others found the May-December romance too good to be true, and saw something awkward when a student hooks up with a former teacher.

But by then, Go was already in love as well.

Like any normal couple, they also have occasional spats, usually over the family finances. But such misunderstandings are often resolved especially with the help of Sarah, 42, one of their adopted deaf children, who mediates also through sign language and “interprets our conversations more accurately.”

“We complement each other,” Go said. “Our age gap and physical limitations have never been a hindrance. I defer to him as the head of the family. I guess that’s the secret of our relationship. I am not the nagging, demanding type; I’ve never even gotten hold of his ATM.”

Go currently works at the Philippine Registry of Interpreters for the Deaf. Inevitably, the principles that guide her at work have found real-life applications in her relationship both with her husband and their deaf children.

“Deaf people mostly feel that they are alone because most of their family members don’t get to learn sign language. They need someone to understand them,” she said.

“They are generally suspicious of other people; when they see someone laughing, they think it’s about them. They won’t give their trust unless you show that you are really interested in them.”

Alexander must have overcome these doubts, these suspicions, the day she started teaching him sign language when he was just 15 years old.

“I guess love is really a function of communication,” Go said, looking back. “Yet sometimes you just need to feel it and leave everything else to God.”