Tibetan protester sets himself on fire in Nepal | Inquirer News

Tibetan protester sets himself on fire in Nepal 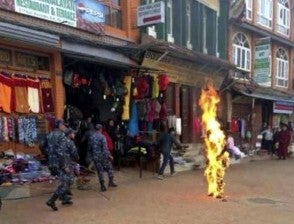 KATMANDU, Nepal— A Tibetan protester doused himself with gasoline, set himself ablaze and chanted anti-China slogans as he ran down a street in Nepal’s capital Wednesday, the latest in a string of self-immolations protesting China’s rule over Tibet.

The dramatic protest marked the 101st time since 2009 that a Tibetan monk, nun or layperson has set themselves on fire, according to officials from the Tibetan exile government, based in India. The protesters are calling for Beijing to allow greater religious freedom and the return from exile of their spiritual leader, the Dalai Lama, who lives in India.

Tibetan exiles say 99 of the protesters set themselves alight in ethnic Tibetan areas inside China. Another man died after setting himself on fire last March in the Indian capital of New Delhi.

Witnesses in Nepal said a man in monk’s robes entered a cafe in Katmandu’s Boudhanath district — home to many Tibetan Buddhist temples and monasteries — and asked to use the bathroom. After spending some time there, he went into the street and lit himself on fire. He ran a few steps, covered in flames and chanting slogans against China, before collapsing in front of the mammoth Boudhanath stupa, one of the holiest Buddhist sites in the country, surrounded by prayer wheels and decorated with colorful streams of flitting prayer flags.

Police official Keshav Adhikari said police and residents were able to put out the flames and rush the man to a hospital. Dozens of baton-wielding police surrounded the hospital where the man lay in critical condition. Adhikari said the man had yet to be identified, but appeared to be about 21 years old.

Wednesday was one of the most important days of the Losar festival, which is celebrated by the Tibetan community. Many Tibetans in Nepal visit Boudhanath for the event.

Prasant Tamang, a waiter at the Golden Eye Cafe, said he found a gasoline bottle, a jacket and a bag in the cafe’s bathroom. Tamang said the man appeared normal and calm.

“He looked like the hundreds of Tibetans who came to Boudhanath today and I did not suspect he was going to set himself on fire,” Tamang said.

Penpa Tsering, speaker of the Tibetan exile parliament in India, said that with China cracking down on self-immolations inside Tibet, Tibetans were beginning to move their protests to other countries.

“It’s unfortunate, and each life is precious, but regular modes of protest are taken away from Tibetans, and they are expressing their discontent in this extreme way,” he said.

China’s Foreign Ministry did not respond to a written request for comment. Two employees who answered the phone at the Tibet regional government’s Foreign Affairs Office said they had no information about the incident.

Nepalese authorities stepped up security around the Boudhanath area. Hundreds of riot police guarded the exits to the shrine and nearby streets. The main street in front of the stupa was closed to traffic. There were no Tibetans visible at the hospital premises.

People at Boudhanath were unsure about the identity of the man who set himself on fire.

Mingma, a local Tibetan community leader who uses only one name, said they were surprised but called it a sacrifice for the people of Tibet. He said the man was attempting to give up his life to draw the attention of the world to the suffering of the Tibetan people.

“He did not harm anyone but was giving up his own life. I see no harm in that, he is a brave man,” Mingma said.

Thousands of Tibetan exiles live in Nepal and occasionally protest against China. The Nepalese government has banned such demonstrations, saying it cannot allow any activities against friendly nations to take place.

Nepal also allows Tibetans to pass through Nepal, traveling from their homeland to Dharmasala, India, where the Dalai Lama lives and the exile government is based.

Communist troops occupied the Himalayan region of Tibet in 1951. Beijing says it has been part of China for centuries, but Tibetans say it was independent for much of that time. The Dalai Lama fled the region in 1959 as Chinese troops crushed protests against Communist rule.