An African pope? ‘Let God’s will be done’—Ghanaian cardinal 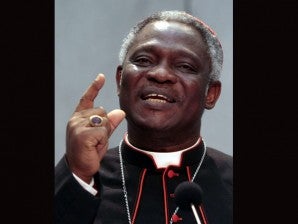 This Oct. 24, 2009 file photo shows Ghanian Cardinal Peter Kodwo Appiah Turkson talking to journalists during a press conference at the Vatican. The resignation of Pope Benedict XVI on Feb. 28, 2013 opens the door to a host of possible successors, from the cardinal of Milan to a contender from Ghana and several Latin Americans. Cardinal Turkson is one of the highest-ranking African cardinals at the Vatican, currently heading the Vatican’s office for justice and peace. (AP Photo/Gregorio Borgia)

VATICAN CITY—Cardinal Peter Appiah Turkson of Ghana, one of two Africans considered eligible to replace retiring Pope Benedict XVI, says the world may be ready for an African pope.

“The Church has followers everywhere,” said the 64-year-old prelate who heads the Vatican’s justice and peace department.

“Africa certainly is an important continent for Catholicism, but so is Asia for example,” he added. “The Church is synonymous with universality… God’s will should be done.”

Turkson is considered progressive by supporters, but some say his decision to show a recent meeting of bishops a video criticising Muslims has damaged his chances.

Other Africans tipped are Laurent Monsengwo Pasinya of the Democratic Republic of Congo, the 74-year-old Archbishop of Kinshasa, and Nigerian John Onaiyekan, 69, the Abuja archbishop.

Cardinal Francis Arinze, also from Nigeria, was considered a possibility when Benedict was elected, but he is now 80 and out of the running.

Onaiyekan, nominated as a cardinal in October, has made efforts to foster unity between Christians and Muslims in his country.

The 2,000-year-old Church has had three previous popes from Africa, the last dating from the fifth century when the Roman Empire included the northern part of the continent.

Benedict visited Africa twice, most recently the west African nation of Benin in 2011, and before that Angola and Cameroon in 2009.

The pope sparked a furore with his first trip when he said distributing condoms in the fight against AIDS “can aggravate the problem”.

His Benin visit came 150 years after what missionaries consider the evangelisation of the country.