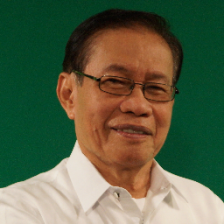 MANILA, Philippines—True to its billing, it was a no-frills Senate campaign for Samson Alcantara of the Social Justice Party on the busy sidewalk in front of his office on Taft Avenue corner Padre Faura Street in Ermita, Manila.

About 50 party officials, students and fellow law school faculty members listened to Alcantara as he presented his platform of governance.

Later, a xylophone-and-drum band kept the atmosphere festive while the 77-year-old candidate shook hands of passersby and his party mates distributed campaign leaflets.

“A candidate with no money like me would have to make do with this. We hope the people will not be fooled and confused by political commercials and by moneyed politicians. Filipinos are now awake and they will choose, not the dynasts, but those who have the capability to serve and who are trustworthy,” he said in his speech.

“The path [to victory] is not straight but bumpy and lined with many cliffs, but we will fight on,” Alcantara said.

He said he would push for a law prohibiting political dynasties.

“While there are political dynasties in the country, there would be no real progress because all political power and economic wealth are controlled by a few families. There are those who say ‘there are good dynasties and bad dynasties,’ but this is not true. It’s not like ‘there’s good cholesterol and bad cholesterol.’ Our Constitution prohibits all dynasties, whether good or bad,” he said.

Alcantara said he would also push for amendments to the labor code and craft a “Teacher’s Code” that would improve the lot of educators.

“We will not have quality education if we have hungry and unhappy teachers. We will propose the creation of a teachers’ bank so that teachers will not have to rely on loan sharks and be victimized by phony education plans,” he said.