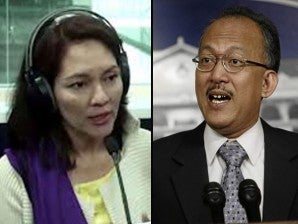 As one of the guests on Tuesday’s episode of ABS-CBN News Channel (ANC)’s “Harapan 2013”, Hontiveros was asked through a Twitter post by a certain Mang Pandoy if it’s true that she’s having an affair with Llamas and that if she wins a seat in the Philippine Senate, how would she deal with the separation of powers between her and the Aquino administration’s Papa.

The Tweet was read by host Lynda Jumilla, a veteran political journalist.

“First of all, I deny it (relationship with Llamas),” she said, before expounding on how one should view relationships.

She said in any aspect of our society, it’s not right to base a woman’s achievement on her connection or non-connection with a man. She said the concept of sexism and patriarchy must be broken.

“Mang Pandoy, maraming aspeto ng lipunan na mas nakakahigit kaming mga babae sa inyong mga lalake (Mang Pandoy, there are many aspects in our society wherein we, the women, have the edge over men),” she said.

Hontiveros ran and lost in the 2010 national elections. She was part of Liberal Party’s senatorial slate.  Prior to her declaration of candidacy for the 2013 elections, she was appointed as spokesperson of the National Anti-Poverty Commission.

Hontiveros and Llamas were former officials of the Akbayan Party-List group before they became members of Aquino’s Cabinet.

Read Next
Cavite cop dies, 5 hurt in Quezon road accident
EDITORS' PICK
Is your company a growth champion? Stand up and be recognized!
Joe Biden sworn in as 46th U.S. president, urges end to ‘uncivil war’
PUP accord with DND also faces termination
4 senators want military, cops off UP campuses
Acer Philippines welcomes you to its first flagship store
New Year, New Rediscoveries
MOST READ
A shade at Roque? Vice asserts being a comedian, not a clown
Makati Shangri-La to close its doors temporarily starting Feb. 1
Biden says Trump wrote him ‘very generous letter’
Trump’s parting gifts to Biden: Roaring stocks, a weaker dollar, tons of debt
Don't miss out on the latest news and information.