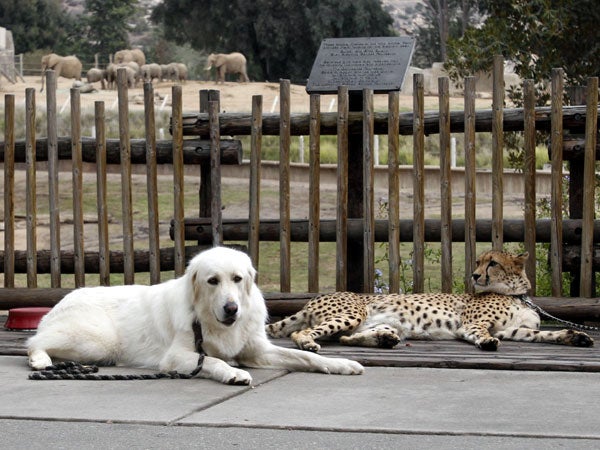 Shiley, a male cheetah 3-and-a-half-years-old, and Yeti, a female Anatolian shepherd who serves as Shiley’s partner, take a break outside the elephant enclosure during a walk through Safari Park, in Escondido, California in this November 2012 file photo. AP

LOS ANGELES—It may sound like a doomed love story, but some dogs love big cats.

Cheetahs are the fastest mammals in the world, but they also are the world’s biggest scaredy-cats — so much so that they don’t breed easily and are in danger of extinction.

Some zoos are introducing “companion dogs” to serve as playmates and to provide the cats with an example.

“It is all about comforting and reassuring the cheetah,” said Janet Rose-Hinostroza, animal training supervisor at the San Diego Zoo Safari Park — the top US breeder of cheetahs in captivity. In the past 40 years, 135 cheetahs have been born at there.

The cheetahs most often found at zoos and wildlife parks are not considered good breeding candidates because they don’t relate well to other cheetahs, or they are abandoned by their mothers, Rose-Hinostroza said. But they seem to take easily to companion dogs and look to the dogs for play and example.

Of the 19 cheetahs at Safari Park, four have dogs. Four of the San Diego Zoo’s cheetahs also have dogs.

The dogs, usually from animal shelters, and cheetah pups generally are introduced when they are about 3 months old.

“In this relationship, the dog is dominant, but we look for dogs that want to be a buddy,” Rose-Hinostroza said.

One of the most popular draws at Safari Park is the 100-meter cheetah run where the public gets to see firsthand the speed of “nature’s perfect sprinter.”

“Speed is incredibly important. It is their survival technique, in a nutshell,” Rose-Hinostroza said.

“That’s faster than every single car on the market, and it only takes three steps,” Rose-Hinostroza said.

Cheetahs use their tails like a rotor to balance while they are running. Their top speed is 60 to 70 mph, based on size, but they can run that fast only for 20 or 30 seconds. Extending that to a minute or more can be lethal.

“Overexertion, heat exhaustion can literally cook their organs at that speed,” Rose-Hinostroza said. She added the average cheetah chase in the wild is 200 to 300 meters.

A century ago there were 100,000 cheetahs in the wild, Grisham said. Today there are fewer than 12,000. The species has become extinct in at least 13 countries. There are about 280 captive cheetahs in zoos across the United States.

As efforts to save the species continue, Grisham worries there is no wild to send them home to because habitat is being swallowed up by developers and poachers are killing the cats for their fur.

The dogs come in all sizes. At Safari Park, the smallest and sweetest is Hopper, a male mutt who weighs 18 kilos. He’s teamed with Amara, the toughest female cheetah on the team, Rose-Hinostroza said.

Cheetah females don’t go into heat like other cats. Instead, they have to be brought into estrus by a male cheetah, the experts explained.

That’s why breeding is so hard. Cheetahs live independently and they seldom hang out with one another.

Although the dogs and cats live together, the dogs also have play dates with other dogs and humans. Mealtimes always are spent apart. The dogs eat kibble, and the cheetahs eat steak.

“The dogs are the bosses in these relationships,” Rose-Hinostroza said. “If they ate together there would be one really fat dog and a really skinny cheetah.”

One of Safari Park’s dogs — the only non-shelter dog — is Yeti, an Anatolian shepherd. She works with two cheetahs — Johari and her brother Shiley.

No one is sure when the idea of cheetah dogs started, but Anatolian shepherds helped advance it. The San Diego Zoo was given a pair of cheetahs in 1981 on the condition they be given dogs because they were used to them.

A few decades ago, Dr. Laurie Marker, founder and executive director of the Cheetah Conservation Fund in the southern African nation of Namibia, brought Anatolian shepherds from Turkey and raised them to protect area goat herds.

“The Anatolian shepherd weighs up to 150 pounds and isn’t afraid of anything,” Grisham said. “They’ll square off against lions and leopards. They don’t always win, but they are very protective.

“Marker gave the dogs to farmers to protect their herds,” Grisham said. When cheetahs came looking for dinner, the dogs scared the cats away and saved the farmer’s goats. At the same time, the dogs saved the cats from being killed by the farmers. There was plenty of other food in the wild for the cats, including gazelles, impalas, springhares, birds, warthogs, kudu and hartebeest.

The dogs have helped cheetah conservation in Africa. “For the first time in 30 years, the cheetah population in the wild is on the rise because ranchers don’t have to shoot them anymore. They don’t need to shoot them. The dog is that effective at keeping the cheetah away from the herd,” Rose-Hinostroza said.