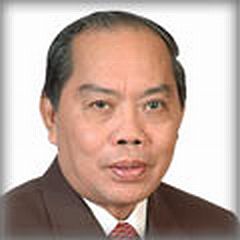 SURIGAO CITY, Philippines – Liberal Party stalwart and Surigao del Norte Representative Francisco Matugas has been charged with plunder before the Ombudsman for allegedly misusing his pork barrel funds by funneling it as the “intelligence fund” of some 15 town officials in the run-up to the 2010 elections.

In a six-page complaint filed by at least six persons on January 30, Matugas was accused of illegally allocating some P63.5 million from his Priority Development Assistance Fund (PDAF) for intelligence funds of local officials from late 2009 to the early part of 2010.

However, Matugas, in a press conference on Monday, dismissed the charge as “politically motivated,” saying the complainants have always been his detractors.

In the complaint, they said there was enough reason to prosecute Matugas for plunder.  They also cited the previous decisions of the Commission on Audit and the Ombudsman, which had declared Matugas’ use of PDAF for “intelligence” purposes as illegal.

COA even rejected Matugas’ appeal on the notice of disallowance it sent to the lawmaker for the use of his PDAF for intelligence purposes.

Asked to comment on the plunder charge, Matugas said he would rather wait for a copy of the complaint to arrive.

But he said he could not be accused of plunder because the money that went to the towns never passed through his hands.

“So where’s plunder here? I have never personally benefited from the funds that they now accuse me of plundering,” Matugas said.

He also rejected the COA opinion, saying that the basis for the release of the funds was a “legal opinion from the Department of the Interior and Local Government.”

“There should be harmony for these agencies — COA and DILG — to agree which is legal and which is not so that we won’t be caught in a bind,” he said.

Matugas also disputed the P63.5 million figure the complainants had claimed, saying the amount could be lower because Representative Guillermo Romarate Jr. of the 2nd district — an ally — had also contributed to the “financial assistance” given to the recipient towns.

Romarate was not included in the plunder charge because of the minor role he played in the release of funds, the complainants said.