Stronger US economy since 1st Obama State of Union 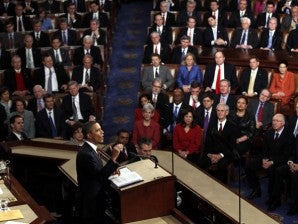 In this file photo, President Barack Obama delivers his State of the Union address on Capitol Hill in Washington last year. Facing a nation still burdened by high unemployment, Obama will center his upcoming Feb. 12, 2013, State of the Union address on boosting job creation and economic growth, underscoring the degree to which the shaky economy threatens his ability to pursue other second-term priorities, including immigration reform and climate change. (AP Photo/Evan Vucci, File)

WASHINGTON— As President Barack Obama delivers his State of the Union speech Tuesday night, he presides over an economy much healthier than the one he inherited four years ago. Yet growth remains slow and unemployment high.

In early 2009, the U.S. economy was in the midst of a full-blown panic sparked by the collapse of a housing bubble. Companies were slashing jobs. The unemployment rate was surging. Auto sales in January 2009 had reached a 26-year low.

“You don’t need to hear another list of statistics to know that our economy is in crisis,” Obama said in his first State of the Union address in February 2009.

The numbers were frightening.

Home prices plunged 19 percent in the 12 months that ended in January 2009. Eventually, they fell by a third overall before bottoming in late 2011.

Perhaps the clearest barometer of the pain was soaring unemployment. The unemployment rate was 7.8 percent in January 2009, just below the current 7.9 percent. But only two months later, in March 2009, it was nearly a full point higher — 8.7 percent. By October it had peaked at 10 percent.

The recovery has been agonizingly slow. Consumers have been wary about spending after piling up debt in the mid-2000s. Local governments, squeezed by tight budgets, have cut 560,000 jobs in four years. And until recently, an anemic housing market discouraged the home construction that in past economic recoveries had powered growth.

Now, companies are hiring modestly but steadily. Employers added an average of 181,000 jobs a month in 2012 and 175,000 in 2011. Still, unemployment remains far higher than the 5 percent to 6 percent that economists regard as normal.

But home prices are finally rebounding as sales and housing starts have recovered. And Americans are buying cars again.

What has happened to the economy since 2009 likely would have happened whoever occupied the White House, Sohn says.

“We tend to give a lot of credit or blame (for the economy) to the incumbent president,” he says. “The fact of the matter is, the U.S. economy is like an aircraft carrier. You can turn it around but not on a dime.”