Aquino wants peace process completed when he steps down 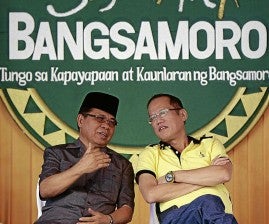 It was the first presidential visit in peace to the MILF’s stronghold in Maguindanao province, which has a recent history of major battles between government forces and Muslim insurgents, who were at times suspected to have been aided by al-Qaida-linked terrorists.

“We have just three years and four months left. We have to speed up everything we are doing now to make this (peace) permanent,” Aquino said.

The President said the completion of the process during his term would ensure that future peaceful relations would not depend on who is in office.

He said the peace process had reached “Heartbreak Hill,” a reference to the final but uphill stretch of the famed Boston Marathon, and “there should be no turning back.”

Under the new program, the Aquino administration is pledging to provide health insurance, assistance in finding jobs and funding for schools for the rebels’ families.

“As we near the top of Heartbreak Hill, more intrigues will come our way. The process is difficult. But remember, what has brought us here is trust,” Aquino said.

But the full details of the agreement are still being thrashed out, and Aquino warned that unnamed figures were putting up “obstacles” to peace.

“I’m just returning the trust you’ve given me; we understand each other so much because we’re ready to sacrifice for one another,” Aquino said.

“I think before I step down, the problem will not be fighting but traffic,” he added, drawing chuckles from the crowd.

While welcoming the government’s initiative, Murad cautioned both sides against plunging headlong into development without a comprehensive peace agreement lest the effort go to waste.

Development, Murad said, must “stand on the solid foundation of peace,” the kind that is achieved by dealing with the fundamental political issues that fueled the conflict in the first place.

Muslim rebels began fighting since the 1970s for independence in Mindanao, the southern third of the mainly Roman Catholic Philippines that the country’s Muslim minority claim as their ancestral homeland.

An estimated 150,000 people have died in the conflict.

A comprehensive peace agreement “must remain the single most important task of this partnership, for only when we achieve this can we be assured of real development,” Murad said.

“I agree with the concept,” Aquino said. “For instance, what kind of problems will take place? There is what we call ‘donor fatigue’? And there is a saying that ‘success has many fathers; failure is a lonely orphan.’”

“Perhaps we could influence them,” Murad said. “They’ll realize what good this will bring.”

“Through the Sajahatra Bangsamoro program, we’re showing that we need not wait for a long time to experience transformation,” Aquino said.

Aquino said the program, which would be implemented in Bangsamoro communities in 18 months, was only part of an extensive strategy to improve the lives of the Muslims of Mindanao.

He mentioned the development of sea-and-land travel to Mindanao, which would shorten travel to the island from Luzon from days to just 15 hours.

Volleyball and softball matches were also lined up for the afternoon.