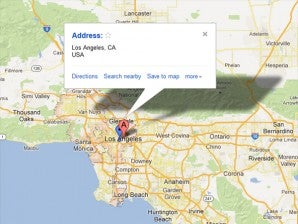 LOS ANGELES – Los Angeles on Sunday announced a $1 million reward for information leading to the capture of an ex-cop accused of “domestic terrorism” in a murder spree that has claimed three lives.

Investigators have been combing the snow-blanketed California mountains for Christopher Dorner, 33, a disgruntled former LA Police Department (LAPD) officer who had threatened to murder police in a chilling online manifesto.

Some 50 LAPD officers and families have been placed under special protection, while police are also carrying out the manhunt and gearing up to to guard the star-studded Grammy music awards to be held later on Sunday.

“We will not tolerate anyone undermining the security, the tranquility of our neighborhoods and our communities,” Mayor Antonio Villaraigosa said at a news conference announcing the reward.

More than 100 police have been searching for Dorner after his truck was found near the ski resort of Big Bear, two hours east of Los Angeles, reportedly with weapons and a broken axle.

The search has focused on cabins above Big Bear, where Dorner’s burnt-out pickup truck was found in nearby woods.

Dorner, a naval reservist, is suspected of killing a couple on February 3, then ambushing two policemen early Thursday, killing one. He also injured another officer in a separate incident.

In an Internet manifesto threatening police and their families, Dorner pledged to “bring unconventional and asymmetrical warfare to those in LAPD uniform whether on or off duty.”

The LAPD, backed by agencies including the Federal Bureau of Investigation (FBI), is protecting over 50 possible targets, some of them identified in Dorner’s rambling online manifesto.

“This is the largest local reward ever offered, to our knowledge,” LAPD Chief Charlie Beck told the same news conference.

“Some may ask why so large? This is an act, and make no mistake about it, of domestic terrorism.”

Police announced Saturday that they would open a new probe into Dorner’s firing in 2007, which apparently left him disgruntled and determined to exact revenge on the department.

The hunt for Dorner, who police describe as “armed and extremely dangerous,” has reportedly extended into the neighboring states of Arizona and Nevada.

“This is not about capturing a fleeing suspect. This is about preventing a future crime, likely a murder,” Beck said.

“We ask the public, please, help us to protect you. Help us to find Dorner before he’s able to kill again.”

Read Next
Japanese rise in Camotes triathlon
EDITORS' PICK
Heads may roll at BOC, says Palace if sugar smugglers are allowed to use recycled import permits
What to watch out for when selecting a video surveillance solution
Apple warns of flaw that lets hackers into iPhones, Macs
House energy committee chair Arroyo bats for cheap electricity
46% of schools nationwide to have full face-to-face classes on Aug. 22
vivo brings to the Philippines a powerful smartphone with a slimmer body, the vivo Y02s for only PHP 6,499
MOST READ
DepEd to give teachers P5K cash allowance within first week of classes
LOOK: Miel Pangilinan dazzles in glittery pre-debut shoot
DOJ indicts bank officer in $2.1 billion Wirecard fiasco
PH importing sugar after all: Marcos okays 150,000 MT
Don't miss out on the latest news and information.