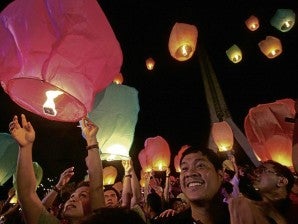 THE PEOPLE of Davao City find creative ways of celebrating the Lunar New Year, like sending colorful lanterns up into the sky, in the midst of a ban on firecrackers and fireworks. KARLOS MANLUPIG

DAVAO CITY—More than 10 years after this city started enforcing what could be the country’s toughest ban on firecrackers, the Davao Chinese-Filipino community is becoming more creative in celebrating the Lunar New Year.

Jasper Huang, public relations officer of the Davao Chinatown Development Council, said the ban on firecrackers does not remove the fun in the Chinese community’s celebration, which partly revolves around noise, a lot of it.

On the eve of the Year of the Water Snake, Huang is working on what could be an alternative for firecracker explosions and fireworks as part of the revelry.

The community plans to put up two concert-sized screens at the Sta. Ana Chinatown gateway where people congregate to play videos of some of the most spectacular display of firecrackers and fireworks during the countdown to the Lunar New Year.

“This way, we will enjoy the sights and sounds of firecrackers without the accompanying risks,” he said.

On Thursday, Huang said he is still talking to a big firecracker company to send all its videos to this city to be shown onstage during the revelry. “This way, we are quite safe,” he said.

“We are going to put up twin concert screens, as big as 10 people, for the video presentation, complete with earsplitting firecracker sounds,” he said, adding that the main event for the countdown will be at the Davao Chinatown gateway on Sta. Ana Avenue.

But even without the firecracker spectacle, Huang said the Davao Chinese-Filipino community has been enjoying the Lunar New Year without real firecrackers for years because they are safe and happy with their families.

“They have no objection to it,” he said, referring to the ordinance banning firecrackers in the city passed by the Davao City Council in November 2002.

“In reality, they’re happy because unlike what we often hear in Manila, no one is wounded or injured in Davao,” he said. “We have our own way of celebrating without firecrackers and people are happy.”

A father of three children, Huang said what’s important for him is time to bond with his family on Lunar New Year Day. “I always make it a point not to be away from my family on this day. That’s more important to me than firecrackers,” he said.

For 10 years since the city’s firecracker ban took effect, the Chinese-Filipino community in Davao comes up with many ingenious ways to celebrate the Lunar New Year. At midnight, they create different types of noise to say goodbye to the old year and welcome the new one.

These include honking car horns, turning up the volume of music players or banging pots and pans.

Huang said members of car clubs are preparing to simultaneously blow their vehicles’ horns at midnight in this year’s countdown. Huang, who describes himself as more a Filipino now than Chinese, said he also honks his car at midnight.

He said other Chinese communities in the Philippines in cities where firecrackers are not banned may still think that it’s more exciting for them to celebrate the Lunar New Year with firecrackers. “But for us in Davao, a law is a law. We can’t do anything about it, but we can always do something to celebrate,” he said.

He said its 44-hectare area makes the Davao Chinatown the biggest Chinatown in the Philippines, although, he said much has yet to be done to make the area more upbeat as center of “Tsinoy” culture.

One of the highlights of the Lunar New Year celebration here this year will be the turnover of the P2-million Prosperity Arch, which would be the fourth gateway to the Davao Chinatown in an area facing the Sta. Ana wharf.

Lunar New Year organizers will also serve tea, noodles and sticky rice cakes for free to revelers and award plaques of appreciation to individuals and institutions who responded to calls for donations during the recent flooding in the city.

Huang said all activities for the Lunar New Year will be celebrated on the streets so more people could see it.