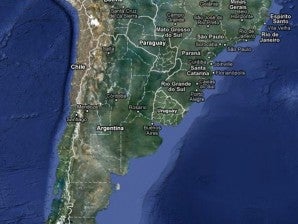 SANTIAGO – At least 15 people were killed and 19 injured on Saturday when a bus carrying soccer fans plunged into a ravine in central Chile, a local official said.

The accident occurred near the town of Tome, in Biobio province, at about 1:00 am (0400 GMT), said Luciano Parra, a spokesman for the Tome mayor’s office.

“The information that we have right now shows that, unfortunately, 15 people did not survive, and 19 others were injured,” Parra told 24 Hours, a television news channel.

“Seven of those injured are in critical condition at the regional hospital,” he added.

The bus was carrying soccer fans from a game that was played the night before in the town of Talcahuano to their home town of Rancagua.

Parra said rescue teams had rushed to the scene but the fall had transformed the bus into a mangled mass of metal, slowing down the rescue process.

Police officers and firefighters were forced to extract survivors one by one, using saws, pliers and other equipment.

The exact cause of the accident is being investigated.

Tome is located about 500 kilometers (310 miles) south of the capital Santiago.

ADVERTISEMENT
Read Next
Blizzard kills two, grinds US northeast to halt
EDITORS' PICK
10 Filipinos positive for COVID-19 in UK, 7 in Ireland — envoy
Nograles: Cabinet members to donate 75% of monthly salary to aid COVID-19 fight
Quick chat with Nicole Andersson: ‘You really don’t need much to be happy’
IATF to LGUs: Issue ordinances vs attacks on frontliners, COVID-19 patients
Diokno to Duterte: OK to make fun of buck tooth, but focus on people’s needs first
Robredo spox thanks Duterte for defending VP’s efforts vs COVID-19
MOST READ
Coronavirus hotbed Rizal to shut borders on April 6
Gov’t mulling quarantine period extension of 15-20 more days
ADB warns PH against prolonged lockdown
Sotto on Isko Moreno’s call: We do our job without the media following our every move
Don't miss out on the latest news and information.