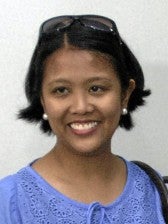 The biggest winner in the latest Pulse Asia survey arguably was the daughter of Vice President Jejomar Binay.

Riding primarily on the popularity of her high-profile father, Nancy Binay jumped to fourth to ninth places, trailing only incumbent Senators Loren Legarda, Francis Escudero and Alan Peter Cayetano. She was 12th in the Social Weather Stations survey last January.

The 39-year-old candidate on Saturday acknowledged what she called the “Binay factor” for her sudden surge. But learning from her father, a veteran politician, she said she remained wary about complacency and the possibility of peaking early.

“Actually, I’ll be working harder now that I’m No. 4,” she told the Inquirer.

It’s a lesson she learned during her father’s successful vice presidential run in 2010. Trailing front-runner Mar Roxas for most of the campaign, the elder Binay made a strong surge toward the end to snatch the victory.

“The moral of the story is never be complacent,” the daughter said.

Binay is on unfamiliar territory, having spent the past several years accompanying her father in his own campaign. “Usually I was just in the sidelines, but now I’m up there on stage, campaigning for myself,” she said.

Binay placed high in recent surveys despite the “baggage” of being her father’s daughter.

The Binays have been accused of building a political dynasty in Makati City, a highly urbanized city that has never had a mayor other than a Binay since Edsa People Power I. The purported dynasty now appears to be moving toward the national stage, with no less than the patriarch occupying the second-highest position in the country. And his daughter is now running for senator.

But Nancy Binay rejected the idea of a “Binay political dynasty.”

“I prefer to call it the Binay brand of public service,” she said. “At the end of the day, the family members occupying positions in government went through a clean and honest election. It’s not that we were appointed or that voters were coerced.”

Binay said her improvement in the Pulse Asia survey was partly the result of her TV ad. But she said he preferred to cover more ground by moving around the country, another lesson she gained from her father.

“He really wants me to reach as many people as possible at the grassroots, the traditional face-to-face, handshake approach. It stems from his being a mayor for a long time,” she said.

And thanks to the color of her skin, she said people had no problem associating her with her father.

“The reception has been very warm so far. It helps that we have the same color. So when they see me and I introduce myself as the daughter of the Vice President, their aura lightens up,” she said.