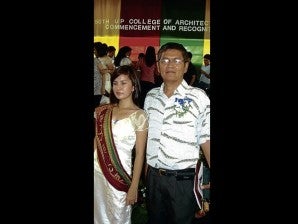 IVANA, Batanes—The first thing that Rhoupheline Aya Cadiz wants to do after topping the architecture board this year is to broaden her knowledge so she could return to her native Batanes and give back.

Cadiz, 25, who was born and raised in Ivana (pop: 1,181 as of 2010), the smallest town in the Philippines in terms of population, said she wanted to use her skills and knowledge as an architect to help preserve her province’s culture and heritage.

“I want to share what I learned in school and help in the cultural conservation in Batanes,” she told the Inquirer.

Cadiz is the first Ivatan to top the architecture board exam. An architecture graduate of the University of the Philippines in Diliman, Quezon City, she got an 87.60 rating in the exam given in Manila last month.

Before studying in UP, she topped her elementary and high school classes in Ivana. During high school in Batanes, she was a youth leader and active in civic and religious organizations.

Rolan and Rosalinda Cadiz, her parents, are both educators. Her father is a high school principal in Mahatao town while her mother is a schools division supervisor.

Cadiz said she would continue working at VVZ Architects in Makati City and take a master’s degree so she could effectively help her province’s efforts in preserving its cultural heritage.

In an earlier Inquirer interview, former Gov. Telesforo Castillejos, now director of Batanes Cultural Travel Agency (BCTA), said there were efforts to preserve and restore Batanes’ stone houses to qualify them for the World Heritage Site for culture, seascape and landscape by the United Nations Educational, Scientific and Cultural Organization.

The friendly Ivatans, their culture and the province’s pristine environment lure visitors from different parts of the country.

Cadiz said she could not believe she emerged on top of 816 board passers this year. “I have mixed emotions and I almost cried when I attended a thanksgiving Mass,” she said.

“I always pray for guidance so that God will give me the wisdom to be able to pass because that is my best gift to my parents,” Cadiz said.

Her father said he was overwhelmed by his daughter’s achievement. “I am the happiest father and I could not believe it. I only prayed that she passed and never expected that she meant what she told us [that she would top the exam],” he said.