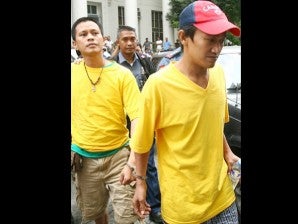 PUERTO PRINCESA CITY, Philippines—The alleged lookout in the hit team in the Gerry Ortega murder case was found dead by strangulation at the Lucena provincial jail, the wife of the victim, Dennis Aranas, said Wednesday morning.

Marilyn Aranas, in a phone interview, said inmates found her husband Dennis already dead with a strap of a bag tied around his neck Tuesday morning.

She said she learned of her husband’s death from jail officials around noontime Tuesday.

She said, however, she does not believe her husband was a victim of suicide because of the bruises she found in his hands.

There was no eyewitness, however, to the alleged suicide of her husband, she added.

Dennis’ body now lie at the morgue in Polaris Funeraria in Lucena City. He has yet to be autopsied as Marilyn said they have no money for the procedure which would cost her about P12,000.

The victim was recently released from the Witness Protection Program (WPP) due to a new murder case filed against him in Gumaca, Quezon in June last year, said Marilyn.

She said, however, she was surprised about the case filed against her husband in Gumaca. She did not elaborate.

Also with Aranas in the WPP is state witness Rodolfo Edrad Jr. alias “Junjun Bumar,” a former Marine soldier, reported as the main link to the mastermind in the killing of the Palawan journalist.