The business of fixing Lingayen Gulf 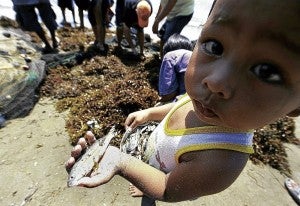 Faced with a dwindling catch, local governments and fishing communities in Pangasinan and La Union are joining hands to save the Lingayen Gulf from further degradation. EV ESPIRITU

Alaska is a remote coastal village of Aringay, La Union, where blast fishing used to be the main occupation of its residents. In this village, some fishermen used to manufacture improvised dynamite sticks that they used in illegal fishing.

“It was the easiest way to catch fish for residents who had no other means of livelihood, not even agriculture,” says Manuel Ugaban Jr., Aringay agriculture officer.

But that was until about three years ago when a strong typhoon struck, causing storm surges that gobbled up a portion of the coastline. Then every storm thereafter, a part of the beach was reclaimed by the sea.

“The residents thought that nature was taking a revenge on them for their uncaring attitude toward the marine environment. They decided to stop illegal fishing. They also started planting mangroves to save their coast from further erosion,” Ugaban says.

To wean them from illegal fishing, the local government gave them P200,000 in livelihood assistance so they could engage in fish trading while others found work as caretakers of fish pens, he says.

Ugaban is one of those who shared the experiences of coastal towns of La Union in caring for, rehabilitating and conserving the ecosystem of the Lingayen Gulf, one of the most biologically diverse bodies of water in the country.

The gulf has been selected for the Ecosystems Improved for Sustainable Fisheries (Ecofish) project of the United States Agency for International Development (USAID) and the Bureau of Fisheries and Aquatic Resources (BFAR) Ilocos office.

Nestor Domenden, BFAR Ilocos director, says there have been strides in efforts to save the gulf from further degradation, although the same problems that confronted it years ago still exist.

Benjamin Francisco, Ecofish project site coordinator, says the project aims to assist in the formulation and implementation of fisheries management strategies in eight coastal towns of La Union and Alaminos City in Pangasinan.

“We will use the ecosystem approach to fisheries management (EAFM), which was developed by the United Nations Food and Agriculture Organization (FAO). It does not only look at fisheries resources but also the ecological attributes of an entire ecosystem like the Lingayen Gulf,” Francisco says.

During the orientation workshop on the Ecofish project, agriculture and environment officers of the coastal towns shared their successes and failures on the protection and rehabilitation of the gulf, which is shared by Pangasinan and La Union.

Valmar Valdez, San Fernando City environment officer, says the 30-hectare marine protected area (MPA), which was established from 2004 to 2007 through the Sagip Lingayen Gulf project, has increased the harvest of marginal fishermen in the La Union capital.

“Five years ago, a fisherman can harvest one or two kilograms of fish within 10 hours at sea. Now they are able to catch three to five kg within an hour of fishing,” he says.

But the area has become a magnet for poachers, although they fish only in the buffer zone and not inside the MPA.

Francisco Dollente, Agoo agriculture officer, admits as much, saying illegal fishing has considerably decreased in his area as “illegal fishers have transferred to San Fernando City.”

But Valdez says San Fernando City can well protect its waters from illegal activities because of accessibility of law enforcers like the Coast Guard, Philippine Navy and the maritime police. The city is developing two other MPAs—a 60-ha area off Barangay Lingsat and a 100-ha area off Poro Point.

Illegal fishing, mostly through the use of dynamite, fine mesh nets and compressors, continues to degrade the gulf’s ecomarine system, officials of the coastal towns admit.

Valdez says strict enforcement of fishery laws and implementing a color coding scheme for boats could be a deterrent. In San Fernando City, boats are painted white and green, and carry numerical codes for easy identification. “Thus it is easy to distinguish the fishing boats which are not from the city,” he says.

The color coding of fishing boats was proposed by the defunct Lingayen Gulf Coastal Area Management Commission but not all coastal towns heeded the proposal. Registration of fishing boats in most towns is also not practiced, the agriculture and environment officers say.

But one of the threats to small fishermen is the entry of commercial boats in the 15-km municipal waters, thereby competing with their already dwindling catch, they say.

The declining catch has forced some fishermen to sell high-value fish and consume fish which they used to throw away.

Rebecca Sabado, Bauang agriculture officer, says fishermen now consume puffer fish, a poisonous fish that they eat after it is thoroughly cleaned and its innards are removed.

Another fish, locally known as “siakok” and “ampapakon,” which fishermen used to give away, has become so rare it is now sold at P60 apiece, she says.