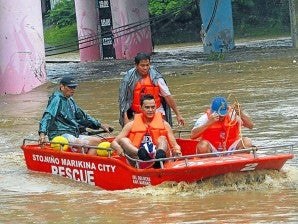 Two successive days of heavy rains on Tuesday triggered floods in parts of Metro Manila, forced the closure of schools and the suspension of work in government offices and, for some, brought back bad memories of Tropical Storm “Ondoy.”

“We will expect rain until Saturday in the western part of Luzon because of the southwest monsoon, if there’s no change in the numerical forecast,” Pagasa’s supervising undersecretary, Graciano Yumul, said by phone. “We don’t know what the intensity is yet.”

The body of a woman in her 60s, believed to have drowned, was fished out from a swelling Talayan Creek in Quezon City, police said. No identity cards were found on her.

Weather forecasters said the spurts of downpour that flooded low-lying areas in the metropolis up to knee level were caused by a monsoon trough, a region of low atmospheric pressure associated with intense rainfall.

“So we had a continuous occurrence of thunderstorms. When we have thunderstorms, we experience moderate to heavy rains. Were it not for the monsoon trough, we would not have experienced the heavy rainfall. We didn’t expect that kind of rainfall,” Paciente said in an interview.

Its station in Science Garden alone recorded a 39-mm rainfall over that period. While relatively heavy, this was still a far cry from the 50-mm rainfall during the onslaught of Ondoy in September 2009.

Ondoy dumped more than 341 mm of rainfall over a six-hour period in a destructive sweep across Metro Manila and Luzon. It killed 464 people.

The heavy rains that began lashing Metro Manila the other day, fell through the night and continued Tuesday were enough to unnerve some people.

“Anything could happen. We were afraid another Ondoy would sweep us and our houses away,” Noli Abinales, a resident of San Mateo in Rizal province, told the Inquirer.

Abinales awoke before dawn on Tuesday and joined other community members in monitoring the water levels in the Marikina and Nangka Rivers.

Jimmy Ceguerra, a barangay councilor of Tumana in Marikina City, said it was nothing like Ondoy but that other residents still felt threatened by how fast the Marikina River rose, swelling by one meter in a matter of five minutes.

Pagasa said that for today (Wednesday), the western section of Luzon would experience monsoon rains, which could trigger floods and landslides.

The rest of Luzon and western Visayas will have mostly cloudy skies, while the rest of the country will be partly cloudy to cloudy with isolated rainshowers or thunderstorms.

The Department of Education on Tuesday canceled classes in elementary schools and high schools early, but this did not stop traffic snarls in major thoroughfares that were suddenly flooded.

For the second time in a week, Malacañang ordered the suspension of classes at the college level. It also suspended work in government agencies in Metro Manila, except those involved delivering basic services.

As a policy, the Commission on Higher Education (CHEd) only suspends classes when the storm signal has reached No. 3.

Communications Secretary Ricky Carandang said the Palace was now monitoring the situation whenever there were heavy rains in the metropolis and “we’re making a determination whether or not we should suspend classes, regardless of what the CHEd policy is.’’

Most flood-prone areas in Metro Manila were submerged in water, tying up traffic for hours.

He feared widespread flooding if the water level at the river breached the 17-meter mark.

Elsewhere, Melgar described the flooding as “pocket incidents” caused by clogged drains and the high tide.

In the Camanava (Caloocan, Malabon Navotas, Valenzuela) area, the high tide was the main cause of the flood, he said.

Floods also hit parts of San Juan and Mandaluyong cities. There were also isolated cases of flooding in Makati City.

Personnel of the flood control office continued to clean up drains, inlets and other waterways as part of the MMDA’s declogging program, Melgar said.

“We decided to operate only half-day today because we thought the rain this morning would never stop,” said Manila Mayor Alfredo Lim’s chief of staff, Ricardo de Guzman.

The rains also flooded some areas in the northern part of Metro Manila.

“Our inflatable boats are ready just in case we need to deploy them within the day,” Alona Ada, head of the Valenzuela City rescue unit, told the Inquirer.

Parts of flood-prone Malabon City were also under water.

The Quezon City government urged residents in flood-prone areas, particularly those near creeks, to leave their homes at the height of the heavy rains.

The bad weather also prompted the education department to suspend classes in some provinces.

Classes at all basic levels in public and private schools were suspended in Calamba City in Laguna province, Rodriguez town in Rizal, and Rosario town Cavite province.