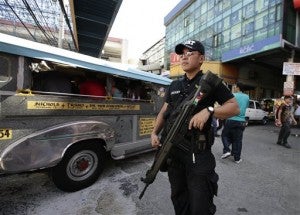 SWAT members of the Philippine National Police make the rounds of business establishments as they go on patrol in Pasay City. AP

MANILA, Philippines – Even by the usual standards in the Philippines, where crime is an accepted part of life, the brazen evening robbery of a jewelry store in one of the world’s largest malls shocked residents of Manila.

Shoppers at the SM Megamall, which attracts up to a million people a day, were forced to duck for cover as shots rang out. After scooping up gold jewelry, police say the robbers intentionally sparked panic by firing into the air, allowing them to mix in with frightened customers running for the exits to make their escape.

The robbery carried out with seeming impunity a week ago, along with one in another mall where the thieves exchanged fire with security guards, have alarmed the police, worried the President who is trying to boost the image of the country and left residents of the Philippine capital feeling helpless.

“You get a feeling of insecurity because you never know what is going to happen to you,” said Ces Afuang, a manager for an insurance company in Manila.

Security problems are not new to the Philippines — kidnappings and bombings have plagued the south of the country for decades — but the latest rash of violence comes as President Benigno Aquino III tries to shore up foreign investments and restore Filipinos’ confidence in their government.

The high-profile crimes resulted in morning radio shows poking fun at the government’s tourism slogan “It’s more fun in the Philippines.” The campaign was launched last year to show that the Southeast Asian nation of 7,100 islands has left behind its old image of a volatile, chaotic place. A record 4.3 million tourists visited last year, with the government setting an ambitious target of 10 million arrivals by 2016.

Few crimes hit closer to home than those in malls, the place where residents of the capital love to shop, eat and hang out.

Even though two of the robbers in the Megamall heist were caught on security cameras, no arrests have been made. There have also been no arrests in the fatal shooting a few days later of a businessman who had just withdrawn money from a bank in San Juan, one of sprawling Manila’s satellite cities. The following day, motorcycle-riding men robbed a money transfer outlet in Parañaque City, a middle-class neighborhood, then fired at a police car to make their getaway, although no one was hurt.

“These criminals … if they want to enter an establishment, they can do so. The security guards are just standing there,” said bank manager Enrico Santos. He added that when security is tightened after an incident, it is usually temporary. “After a while, say a month or two later, they go back. Security is lax.”

Santos said he worries about his family and has started sending them messages telling them to stay away from certain places.

The government is aware of the problem and consequences for the country’s image, but Interior Secretary Manuel Roxas II said there are not enough police on the streets and intelligence gathering is lacking.

“I am, like everyone else, also alarmed that despite the measures taken by the Philippine National Police, including checkpoints and others, these criminals are trying to challenge the government,” he said in a radio interview.

National police chief Alan Purisima said Aquino called him and Roxas to a meeting last week and ordered them to step up the anti-crime campaign, specifically targeting armed robbers.

Aquino said earlier that the national crime volume had fallen 10 percent from 2011 and 2012, but expressed concern that it was rising in the Philippine capital. According to the latest police data, crime rates in Manila jumped 57 percent in the first half of 2012 from a year earlier.

Bishops from the dominant Roman Catholic Church expressed alarm at what they called a culture of impunity and the rise in unsolved crimes. In a pastoral letter, they said that “extrajudicial killings, unsolved crimes and kidnappings continue and the government is not able or lacks the political will to prosecute the perpetrators and touch powerful people.”

The proliferation of firearms — police estimate there are up to 1 million unregistered weapons — have fueled violence and insurgencies in the country for years despite calls from lawmakers and pressure groups for tighter gun control. A dysfunctional justice system with crowded jails and underpaid prosecutors and judges has produced a massive backlog where a criminal trial can stretch over six years or more.

Organized crime is a problem too, as is political corruption.

The unease about crime in Manila and whether the government can get a handle on it comes ahead of congressional and provincial elections in May. Philippine elections are usually passionate events that are marred by violence. Authorities have declared a gun ban and set up checkpoints to confiscate weapons carried in public.

“A growing crime rate is the worry of everybody, election period or not,” said Commission on Elections Chairman Sixto Brillantes.

The country’s top policeman, Purisima, who took charge of the 148,000-strong police force just more than a month ago, said among the options considered were daytime checkpoints and sharing police radio frequencies with private security guards and traffic authorities to speed up police response times. At the same time, daytime checkpoints could slow already notoriously sluggish traffic, he said.

He ordered security guards in malls to carry weapons and get better training, to avoid being “sitting ducks” for armed robbers.

Afuang, the insurance company manager, said she didn’t think security checks for weapons at malls were anything more than cursory inspections.

“I have never seen anyone being told to step aside” for closer scrutiny, she said. “You feel afraid because these things are happening close to you. Do you just go home and stay at home?”