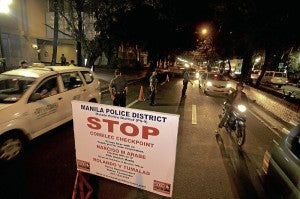 One of the checkpoints set up in Metro Manila in connection with the five-month election gun ban. RICHARD A. REYES

Contrary to the practice of holding checkpoints at night, Purisima said field reports so far showed that most violators were captured during the day.

“Our order to our station commanders and chiefs of police is to conduct random checkpoints even during the day,” Purisima said in a radio interview Sunday.

“This order is based on the assessment of our staff in Camp Crame that most of the apprehensions made in checkpoints do not occur in the afternoon until midnight,” he added.

The PNP chief said he also ordered police officers in checkpoints to concentrate on all kinds of vehicles and not only on motorcycles.

Motorcycles are the focus of checkpoints due to the observation that many crimes are committed by those riding-in-tandem for easier getaway.

Purisima said they have been reassessing their checkpoint plans after the numbers debunked the notion that most crimes happened at night.

“That’s why it’s very important for our police officers to correctly report the time of occurrence of crimes so we can assess the deployment of our police force,” he said.

For the May 13, 2013 midterm election, the Commission on Elections (Comelec) imposed a gun ban from January 13 to June 13 to reduce election-related violence.

All permit to carry firearms outside residence are suspended during the gun ban period.

Only security personnel with Comelec gun ban exemptions are allowed to carry firearms.

Carrying, bearing and transporting of firearms, ammunition and deadly weapons during the election period are punishable with one to six years imprisonment.