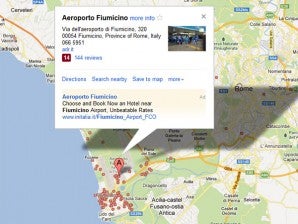 ROME — A Romanian plane carrying 50 passengers veered off the runway while landing at Rome’s Fiumicino airport on Saturday, injuring three people who were rushed to hospital, authorities said.

The ATR 72 turboprop plane of the Romanian airline Carpatair arriving from Pisa finished up at an angle on grass with its landing gear damaged, emergency services and airport officials said.

One of the three people hospitalised, a Romanian flight crew member, was said to have suffered spinal injuries but his condition was not life-threatening.

Another of those hurt had pelvic injuries.

Investigators were attempting to establish the cause of the accident, with bad weather — winds and rain may have made the landing difficult — or pilot error suspected.

A passenger on the plane told Ansa that the plane had touched down twice. “The second time the landing gear was bent out of shape and we ended up off the runway.”

He described scenes of panic and screaming.

The Rome airport remained open though one of its runways was closed.

According to Italian media, several recent incidents have shed an unfavourable light on the partnership between Alitalia and Carpatair.

The Carpatair plane involved in Saturday’s accident was carrying out an Alitalia flight.

In a statement Alitalia said that “strong winds” had forced the plane off the runway and announced the suspension of all its flight operated by Carpatair from Pisa and Bologna.

Last month a Carpatair flight between Ancona and Rome made an emergency landing soon after take-off.

Earlier in January another of the Romanian company’s planes was forced to make a U-turn following cabin pressure problems which obliged passengers to use oxygen masks.

On January 10 the company issued a statement, denying any reliability problems and denouncing a “media campaign” against it fuelled by “Italian trade unions and pilots” unhappy with Carpatair’s partnership with Alitalia.