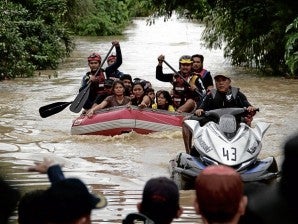 FLOODS like this in Davao City on Jan. 20 have been uncommon in Mindanao in the past. Environmentalists are pointing to a growing list of factors, including the massive expansion of palm oil plantations in Mindanao’s vast land. DENNIS JAY SANTOS/INQUIRER MINDANAO

DAVAO CITY—Palm oil plantations in Mindanao have been added to a growing list of factors to blame for some of the worst cases of flooding that struck the island and for disasters of magnitudes unknown to the island in the past, like the storms “Sendong” and “Pablo.”

On Saturday, environmental groups said palm oil plantations—along with illegal logging, expansion of banana plantations and real estate development— are among the main causes of the worst flooding brought by bad weather conditions that have recently hit Mindanao.

Armand Pacudan, Mindanao unit manager of  Foundation for the Philippine Environment (FPE), said the clearing of  Mindanao’s forests had worsened because of the entry of palm oil plantations in recent years.

The denudation, he said, was the main reason flooding had become worse, constantly keeping many communities under water.

“We are all now paying the price for burning our forest covers to set up  palm oil plantations, subdivisions and golf courses,” Pacudan said during a meeting with reporters here.

“We have changed the environmental landscape of Mindanao. Climate change has set in, we now have killer typhoons and deadly floods,” he added.

He said even the Liguasan Marsh—Asia’s largest wetland and home to more than 200 rare local and migratory birds— had not been spared from the influx of palm oil investors.

Oil derived from African oil palm trees (Elaeis guineensis), the main variety being planted in Mindanao, is popular in homes in many countries because of its highly saturated vegetable fat.

“There are now patches of oil (palm) farms in the Sultan Kudarat area of the Liguasan Marsh,” said Pacudan, whose group maintains a biodiversity conservation and sustainable development project at the Liguasan Marsh.

He said studies showed that there was a strong correlation between the mad rush to clear the forests for palm oil farms in the 1970s and 1980s in Mindanao to the killer floods brought by Sendong and Pablo.

Malaysia and Indonesia alone, according to financial reports, made a combined total of $40 billion from palm oil in 2012. The two countries are considered the world’s top two palm oil producers.

Recently, Malaysian investors seeking to expand their plantations visited Mindanao in December and committed to invest P23 billion to develop areas in the Liguasan Marsh.

Currently, the total area planted to palm in the country is 54,448 hectares, according to data provided by the Philippine Palm Oil Development Council.

Mefi is opposing a proposal to convert a million hectares of land in Mindanao into “palm oil estates,” Teoxon said.

Dr. Phares Parayno, head of Miriam College’s Department of Environment, cited the case of a palm oil company—A. Brown Co. Inc., which has an

He said the company was being criticized by Higaonon communities there.

“The expansion of oil palm farms affects not only the ecosystem but also the lumad and Muslim people living in the [plantation] areas,” he said.

Greenpeace said aside from leading to forest denudation, the clearing and burning of forests for palm oil plantations are one of the major causes of air pollution in Southeast Asia. Germelina Lacorte, Inquirer Mindanao