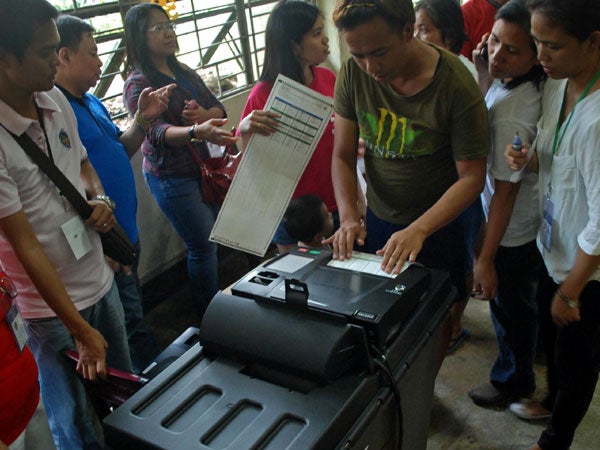 MOCK ELECTION. Voters cast thier vote during a mock election at UP Integrated High School in Quezon City.ARNOLD ALMACEN/INQUIRER

MANILA, Philippines—The Commission on Elections’ dry run for the May 2013 elections was marred by glitches but Comelec Chairman Sixto Brillantes Jr. insisted that no major problem occurred.

Brillantes said the “minor” problems encountered during Saturday mock elections in 10 places across the country included precinct count optical scan (PCOS) machines that did not immediately start or paper ballots that jammed.

Eric Alvia, secretary general of the election watchdog National Movement for Free Elections (Namfrel), said the other glitches reported were differing lists of voters, low turnout, PCOS machines with missing clips and rollers that did not work, and technical staff who did not report early.

“We saw no major problem. We had some initial minor problems but everything has settled down,” Brillantes said at a press conference at the P. Bernardo High School in Quezon City, one of the main voting centers.

“It’s speculative but maybe since the PCOS machines were last used in the 2010 elections, or two and a half years ago, we needed to heat them up a bit,” he added.

The Comelec held the mock elections 10 areas across the country from 7 a.m. to 7 p.m. and it involved 1,639 potential voters in 11 polling precincts. Brillantes said no major problems occurred.

Brillantes said one of the minor problems they encountered was the “initialization” or starting up of the PCOS machine at the University of the Philippines Integrated School in Diliman, Quezon City.

“And then when it started, the ballots would not enter. The machines did not absorb them. So, what happened was that there was an issue of whether the ballots were too thick,” he said.

To remedy the problem, the Comelec had to bring in a new PCOS machine and replace the one that malfunctioned.

“We will look into the extent of this problem. We think at this point that it affects that individual machine only,” said Comelec spokesperson James Jimenez.

“We are also looking at the possibility that the ballot was rejected because it was somewhat crumpled at the edges, so maybe it did not fit the roller. Again we have to check the tolerance of the roller,” he added.

Jimenez said the Comelec would investigate the glitches so they would not recur on election day.

“We have 76,000 (voting) precincts but we have more than 81,000 machines so that the excess could be used for contingencies,” he added.

NAMFREL’s Alvia said that the reported incidents of ballot  jamming in PCOS machines was a reminder for the Comelec.

“It’s a (lesson) because from February 4 to April 25, we print the official ballots. Now is the time to make sure the grade or quality of the paper is appropriate for the PCOS machines,” Alvia said.

“We don’t know if maybe the the humidity might affect the thickness, or how you store it, how you package it, you name it. Even the grade of the paper, it’s a science in itself. We have to pay attention to those things,” he added.

Alvia said incidents of jammed ballots were reported at the UP Integrated School, at  P. Bernardo High School, and in Singalong, Manila.

He said the principal of P. Bernardo High School informed him that they had to assemble the kit for the PCOS machine on their own because there was no technical staff present.

“There was an absence of technical personnel from the vendor. They were not here. The technical person arrived at 7:15. So, you really have to be present early on,” Alvia said in an interview. “The teachers who were here—I surmised that some of them were really seasoned and trained already—they really knew how to respond to it and they kept calm,” he added.

Alvia noted that as of 10 a.m. Saturday—three hours after the precincts opened—only 27 out of the 750 voters had cast their ballots.

He also noted that the list of voters posted outside the precinct was different from the one that the Board of Election Inspectors held.

“There was a lady (who) had some difficulty in searching (for her) name. Anyway, we still have around two weeks to go before Comelec releases the CVL (Certified List of Voters) and we’re waiting for that,” Alvia said.

“NAMFREL and the other groups  can help to really authenticate and validate if the CVL that Comelec national produces is one and the same as what the local Comelec has. It’s an area where fraud could occur,” he added.

“You can use ordinary paper. An ink printer may be mechanical but the ink would last. If you expose thermal paper to UV (ultraviolet) light, after probably one day, you won’t be able to read (what’s printed on it),” he said.

“And if you are really going to use that as a log, as a paper trail, then it defeats the purpose of using thermal paper,” he added.