British, Irish technical divers in Malapascua are Filipinos at heart 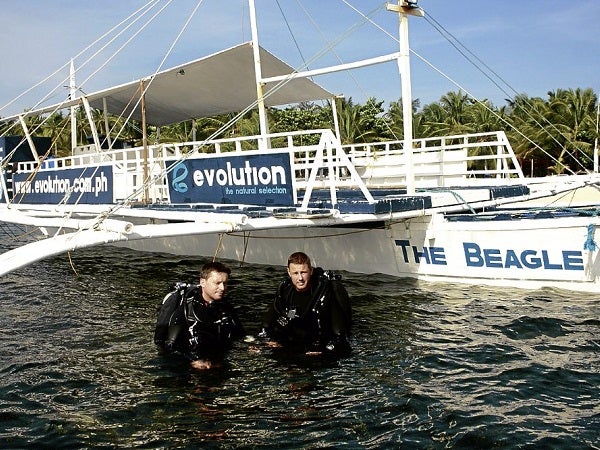 MALAPASCUA ISLAND, Cebu—When technical divers and business partners Matt Reed and David Joyce received a call for help to retrieve the remains of a Piper Seneca plane that crashed in Masbate on Aug. 18 last year, their immediate response was to pack their gears and head off to the island-province at the southern tip of Luzon.

It was urgent, they were told, and that the operation was to be overseen by then Transportation (now Interior) Secretary Manuel “Mar” Roxas II.

They later learned that they would be part of a team looking for Interior Secretary Jesse Robredo, Filipino pilot Jessup Bahinting and Nepalese copilot Kshitiz Chand after their plane crashed in the waters off Masbate.

Reed, together with fellow divers Anna Cu Unjieng and Shelagh Cooley, found the fuselage and the bodies of Robredo, Bahinting and Chand at

7:45 a.m. on Aug. 21, the day the nation also commemorated the anniversary of the 1983 assassination of former Sen. Benigno “Ninoy” Aquino Jr.

The bodies were found 800 meters from shore at a depth of 180 feet.

Joyce, who co-owns a diving school called Evolution with Reed, did not join the team. He stayed on Malapascua Island because his wife, Emma, was about to deliver their first child.

While they would not disclose the details of the retrieval work, Reed said their experience was memorable, especially that it made them serve the Philippines in a manner they know best.

Reed, 35, is British, while Joyce, 39, is Irish. But both have considered the Philippines their home.

“The Philippines is a beautiful country, and we are happy to call it our home and our place of work. We always feel encouraged to give back, and we are glad to be of help in the way we can,” Reed said.

The partners established Evolution in March 2010, which offers a wide range of diving lessons for amateurs and professional divers.

Reed started diving at age 17. He had already gone to different countries before reaching the Philippines. He first started a dive shop in Dumaguete City in Negros Oriental.

Joyce, on the other hand, was a TV producer and director in Ireland for 13 years before he developed the love for diving and saw an opportunity to change careers.

In one of Joyce’s holiday trips to the Philippines in 2008, he met Reed and discussed the possibility of doing business together.

“We knew the Philippines was the right place. It was just a question of where exactly,” Joyce said.

They went to different islands until they reached Malapascua, a diving haven in Daanbantayan town in Cebu’s northern tip, a three-hour drive from Cebu City.

Joyce immediately liked Malapascua which is quite pristine, away from the main strip with few people, and rich in marine resources.

Walking around the island, Reed and Joyce agreed that they had found their little piece of paradise and decided to set up their homes and Evolution. The diving school officially opened on March 17, 2010, on a rented beach front property with an area of 2,000 square meters.

From four rooms, Evolution now has 10 with a staff of

Although Malapascua is far from Cebu City, Reed and Joyce are not complaining. “We are both tropical island people, and we know that this is the place where we want to live and work. We feel very much at home. We are settling here. This is where we want to be,” Joyce said.

The Evolution website says technical diving goes to a maximum depth of 130 feet or 40 meters, has no decompression and always has a direct access to the surface.

“Everything has to be calculated … . When you return to the surface, it has to be slow  (taking 90 minutes to two hours or 3 meters per minute).

You have to be prepared—four tanks containing different gases, regulators and rebreather units have to be on standby,” Joyce said.

Regulators are used for decompression while rebreathers allow the gas divers’ exhale to be processed so they can inhale again.

Wreck diving is close to the hearts of the two. Reed said discovering what could be the MV Pioneer Cebu in the coast of Malapascua in August last year had helped put a formal closure to families of the victims of the sunken ship. The vessel was last seen in 1966 and was reported to have 262 passengers when it sank.

It took the diving team 18 months to prepare and coordinate closely with local fisherfolk. But a first attempt to locate the ship in 2011 failed, Joyce said.

“[Wreck diving] is exciting because we get to be in a place where nobody else has been before. But the most important part is when we had relatives or family members come up to us and tell us that finding the wreckage helps bring closure [to the death of their loved ones],” Reed said.

As island residents, Joyce and Reed are aware of illegal fishing and their roles in ensuring that natural resources are protected. “We don’t always see it but we always hear it,” Joyce said.

The partners are working with Coast Guard personnel and Bantay Dagat volunteers to prevent the further destruction of coral reefs and decline in fish catch. “If we continue to work with these agencies and groups, we would like to do more in educating people about sustainability,” Reed said.

With their white complexion and high-bridged noses, Reed and Joyce are not likely to be mistaken for local islanders, but they are as Filipino as anybody else. They, too, love “adobo,” “pochero” and Bicol Express.

Every Christmas, they organize a party with the local children, a gesture that has made them closer to the community. “I don’t know if I will be doing that in Europe,” Reed said.

Working with Filipinos has taught them the value of patience and perseverance.

“Most Westerners expect things to happen on time. In here, you need to be flexible. There is a different way to deal with people and get the best out of them,” Reed said.