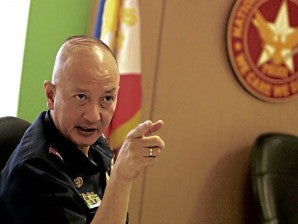 A week after robbers sneaked past security at a shopping mall and used pipe wrenches bought from the same mall to smash jewelry cases open, authorities are now keeping a close watch on shoppers buying hardware tools.

Espina said mall managers had agreed to a scheme wherein purchase stubs would be issued to customers who bought hardware tools that can be used for robbery or an assault. They can only claim the purchased items, however, after presenting the stubs to security guards posted “outside” the mall.

“Customers won’t be using hammers or pipe wrenches in the mall (anyway), so there’s no point in carrying them while in the area,” Espina told the Inquirer in a phone interview.

Espina, who inspected Megamall shortly after the robbery that Saturday night, said its security guards had been lax in checking the bags of incoming mall-goers, hence armed robbers were able to get in.

The movements of five of the six robbers were caught on the mall’s closed circuit television cameras. Two were seen carrying pipe wrenches bought inside the mall and using them to smash the glass jewelry cases on the ground floor of the mall’s main department store.

Another was seen carrying a .45-cal. pistol tucked in his waistband, also undetected by security guards.

The Jan. 26 heist was discussed by Metro Manila mayors and private sector representatives in a meeting at Makati City Hall on Friday.

In an interview after the meeting, Valentine Hizon of Ayala Malls Assets Security, said hardware stores at Ayala establishments had been advised to immediately inform his office about customers buying hammers and wrenches.

In the same meeting, Las Piñas City Mayor Vergel Aguilar said police visibility should be enhanced at shopping malls since “robbers are more threatened by the police than by the security guards.”

“If you have a gun, you will engage (in a gunfight),” he said. “The people’s welfare should still be the top priority.”

Binay said the PNP should instead step up its intelligence work against robbery gangs.