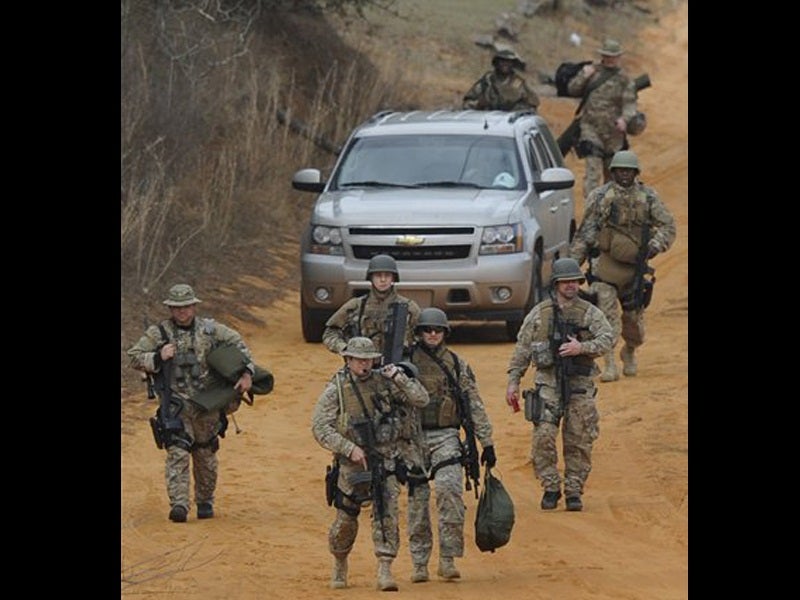 Heavily armed men come back down the hill from the direction of the suspect’s home at the Dale County hostage scene near Midland City, Ala. on Wednesday Jan. 30, 2013. Police SWAT teams and hostage negotiators were locked in a standoff Wednesday with a gunman authorities say intercepted a school bus, killed the driver, snatched a 6-year-old boy and retreated into a bunker at his home. (AP Photo/Montgomery Advertiser, Mickey Welsh)

MIDLAND CITY, Alabama— Speaking into a ventilation pipe, hostage negotiators tried to talk a man into releasing a 5-year-old boy and ending a standoff at an underground bunker in rural Alabama that stretched into its third day.

The man identified by multiple neighbors and witnesses as 65-year-old retired truck driver Jimmy Lee Dykes was accused of pulling the boy from a school bus on Tuesday and killing the driver. The man and boy were holed up in a small room on his property that authorities compared to tornado shelters common in the area.

James Arrington, police chief of the neighboring town of Pinckard, said the shelter was about 4 feet (1.2 meters) underground, with a ventilation pipe that negotiators were speaking through.

There were signs that the standoff could continue for some time: A state legislator said the shelter has electricity, food and TV. The police chief said the captor has been sleeping and told negotiators that he has spent long periods in the shelter before.

“He will have to give up sooner or later because (authorities) are not leaving,” Arrington said. “It’s pretty small, but he’s been known to stay in there eight days.”

Midland City Mayor Virgil Skipper said he has been briefed by law enforcement and visited with the boy’s parents.

“He’s crying for his parents,” he said. “They are holding up good. They are praying and asking all of us to pray with them.”

The normally quiet red clay road was teeming Thursday with more than a dozen police cars and trucks, a fire truck, a helicopter, officers from multiple agencies, media and at least one ambulance near Midland City, population 2,300.

The standoff is one of a string of attacks involving a gun to capture national attention amid a fierce debate over gun control in the aftermath of a December massacre of 10 children and six adults at a Connecticut elementary school.

Republican Rep. Steve Clouse, who represents the Midland City area, said he visited the boy’s mother Thursday and that she is “hanging on by a thread.”

“Everybody is praying with her for the boy,” he said.

Clouse said the mother told him that the boy has Asperger’s syndrome, an autism-like disorder, as well as attention deficit hyperactivity disorder, or ADHD. Police have been delivering medication to him through the pipe, he said.

Dykes was known around the neighborhood as a menacing figure who neighbors said once beat a dog to death with a lead pipe, threatened to shoot children for setting foot on his property and patrolled his lawn at night with a flashlight and a firearm.

The chief confirmed that Dykes held anti-government views, as described by multiple neighbors: “He’s against the government — starting with Obama on down.”

“He doesn’t like law enforcement or the government telling him what to do,” he said. “He’s just a loner.”

Authorities say the gunman boarded a stopped school bus Tuesday afternoon and demanded two boys between 6 and 8 years old. When the driver tried to block his way, the gunman shot him several times and took a 5-year-old boy off the bus.

The bus driver, Charles Albert Poland Jr., 66, was hailed by locals as a hero who gave his life to protect the 21 students aboard the bus.

No motive has been discussed by investigators, but the police chief said the FBI had evidence suggesting it could be considered a hate crime. Federal authorities have not released any details about the standoff or the investigation. The mayor said he hasn’t seen anything tying together Dykes’ anti-government views and the allegations against him.

Dykes had been scheduled to appear in court Wednesday to answer charges he shot at his neighbors in a dispute last month over a speed bump. Neighbor Claudia Davis said he yelled and fired shots at her, her son and her baby grandson over damage Dykes claimed their pickup truck did to a makeshift speed bump in the dirt road. No one was hurt.

The son, James Davis Jr., believes Tuesday’s shooting was connected to the court date. “I believe he thought I was going to be in court and he was going to get more charges than the menacing, which he deserved, and he had a bunch of stuff to hide and that’s why he did it.”

Neighbors described a number of other run-ins with Dykes in the time since he moved to this small town in a region known for peanut farming.

A neighbor directly across the street, Brock Parrish, said Dykes usually wore overalls and glasses and his posture was hunched-over. He said Dykes usually drove a run-down “creeper” van with some of the windows covered in aluminum foil.

Parrish saw him often digging in his yard, as if he was preparing a spot to lay down a driveway or a building foundation. He lived in a small camping trailer on the site. He patrolled his lawn at night, walking from corner to corner with a flashlight and an assault rifle.

Court records showed Dykes was arrested in Florida in 1995 for improper exhibition of a weapon, but the misdemeanor was dismissed. The circumstances of the arrest were not detailed in his criminal record. He was also arrested for marijuana possession in 2000.