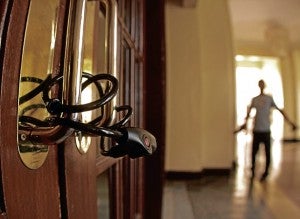 The main door of the office of suspended Cebu Gov. Gwen Garcia in the capitol was padlocked Wednesday morning after she left it the night before. Police boarded up the door, locking out Garcia. LITO TECSON / CEBU DAILY NEWS

MANILA, Philippines—Malacañang on Thursday expressed relief that defiant Cebu Governor Gwendolyn Garcia has finally been locked out of her office at the provincial capitol, ending a potentially costly political standoff with the Aquino administration.

President Benigno Aquino’s spokesman, Edwin Lacierda, defended acting Governor Agnes Magpale’s order to padlock Garcia’s office in the Cebu provincial capitol Wednesday when she sneaked out a month after barricading herself inside in defiance of a suspension order from Malacañang.

The order that effectively locked Garcia out “settles the issue,” Lacierda said at a Malacañang news briefing.

“The issue will move from the provincial capitol to the courts as it should rightly be,” he said. “This is now a legal case. From the very start, we hold that the suspension has validity and it will stand legal scrutiny.”

The standoff at the capitol, prompted by Garcia’s decision to hole herself up in her office in defiance of her suspension from December 19 last year, had threatened to blow up anytime.

Since Garcia did not show any sign of budging, it would have been costly for the national government to move in and forcibly take her out, so the administration chose to wait for the Court of Appeals’ ruling on her petition to nullify the suspension order.

The opportunity to end the standoff came when Garcia sneaked out late Tuesday night to inaugurate a briefing center of the Oslob Whale Watching Program in Oslob town the next day. While she was out, Magpale ordered provincial administrator Eduardo Habin to padlock her office Wednesday.

The Office of the President, on the recommendation of the Department of Interior and Local Government, ordered Garcia’s relief for grave abuse of authority for usurping the powers of the vice governor.

Garcia left her office for the first time on January 20 to join the Sinulog Grand Parade at the Cebu City Sports Center grandstand, and went back.

Malacañang stood by Magpale’s order to padlock Garcia’s office, citing the suspension order against her.

Magpale said she had been tolerating Garcia’s presence in the Capitol for over a month. She said Garcia’s act of sneaking out was a mockery of the President’s order.

She said Garcia’s supporters turned the Capitol’s offices into sleeping quarters, and did their laundry there.