MANILA, Philippines—(UPDATE) The five members of the Special Action Force (SAF) submitted their affidavits Tuesday to the Department of Justice on their alleged participation in the break-in at Batasang Pambansa to allegedly switch election returns of the 2004 national elections.

“They have submitted their sworn statements in two sets depending on their participation. Pending the formal commencement of the joint DoJ-Comelec Special Investigation Committee, I will be keeping this,” De Lima said.

“That our “CO.” Supt. (Rafael) Santiago, thought that the only way we can survive the possible repercussion of our action is to get out of SAF, stay together and guard each other’s back…We know we were already expendable from the start from those who want us to keep our silence and maybe bring our secret along to our graves,” the police officers said in their affidavits. 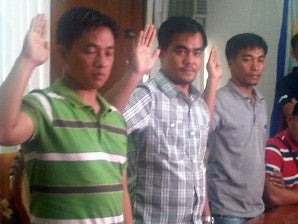 The police officers led by Senior Superintendent Rafael Santiago was supposed to submit their affidavit last week but was not able to do so. Lawyer Vic Rodriguez said they had difficulty preparing the affidavit because they were moving from one place to another for their own security and protection.

The five men were part of the team led by Santiago which allegedly pilfered 38 election returns out of the boxes that they have transported from a house in Cainta to the House of Representatives and back in several trips in January and February 2005.

Santiago told a press conference last week that it was only later that he and his men realized that the operation was carried out in anticipation of the possible conduct of a recount due to the election protest filed by actress Susan Roces, wife of the late action star and presidential candidate Fernando Poe Jr.