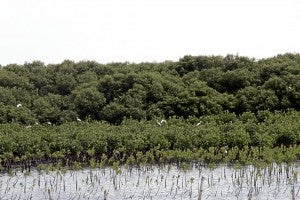 CITY OF MALOLOS—The coastal villages of this city have become a mangrove sanctuary.

Mangroves provide local fishermen a chance to improve their lives by rehabilitating their source of livelihood, said Daniel Sta. Ana, a fisherman and leader of the Bantay Dagat team that oversees the mangrove plantations along the rivers and Barangays Pamarawan, Caliligawan, Calero, Babatnin, Masili and Namayan.

He said the mangroves had started to help clean up the marine environment and fish had repopulated the coastal waters.

“Our mangrove sanctuary protects us from effects of global warming and climate change, or from tsunami,” he said.

Among the daily catch of fishermen are “alimasag” (small crabs), “asuhos” (cod), tilapia and “bangus” (milkfish).

“We did not catch as many fish before. But today, when everyone here takes care of the marine environment, our daily harvests have been bountiful and we are happy,” he said.

The fishermen have taken the task of planting mangroves and have been monitoring the rivers and the coastlines of Manila Bay for signs of dynamite fishing.

The fishermen have also been coordinating with fishpond operators in nearby rivers in implementing a ban to artificial feeds that occasionally flow into the mangrove areas.

Mangroves grow better and safer along the Manila Bay coast than in the river, based on the records of Bantay Dagat. They grow fast between December and January and February, or during summer. Carmela Reyes-Estrope, Inquirer Central Luzon